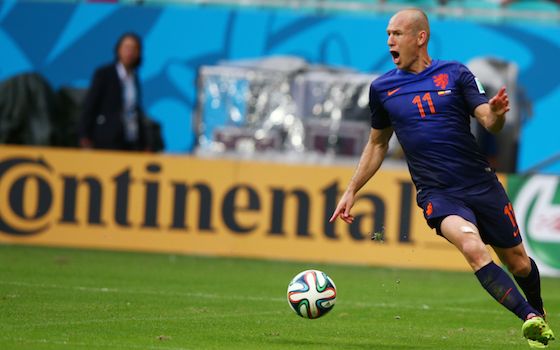 Stunning goals from Dutch captain Robin van Persie and Arjen Robben ensured an awful start to Spain's World Cup defense as the Netherlands destroyed one of the tournament favorites 5-1 in Group B on Friday (June 13). In complete contrast to the World Cup final between the sides in 2010 which Spain won 1-0, the Dutch took revenge with a pulsating display capped off by two goals each for Van Persie and Robben and one by Stefan de Vrij

Spain took the lead at the 27th minute lead with Xabi Alonso's penalty after striker Diego Costa went down under a challenge from de Vrij, only for Van Persie to equalise brilliantly in the 44th minute. The Dutch forward stole in between Sergio Ramos and Jordi Alba to meet a searching Daley Blind cross with a powerful diving header that left goalkeeper Iker Casillas rooted.

Moments before Van Persie's goal Spain missed a glorious chance to double their lead when midfielder David Silva's cheeky chip was pushed wide for a corner. It was a wasted chance they came to rue.

After the break the Dutch poured forward and went ahead after 53 minutes when Robben got on the end of another superb Blind lobbed pass before turning Gerard Pique and holding off Sergio Ramos to fire home from seven metres. The match opened up but in the Netherlands' favor with De Vrij stealing in on 64 minutes at the back post to convert a free kick after Van Persie put Casillas under pressure.

It got worse for Spain as Van Persie added a fourth after taking advantage of a sloppy touch by Casillas to slot home in the 72nd minute and Robben stunned a raucous crowd as he toyed with the Spanish defence and Casillas before belting home in the 80th.