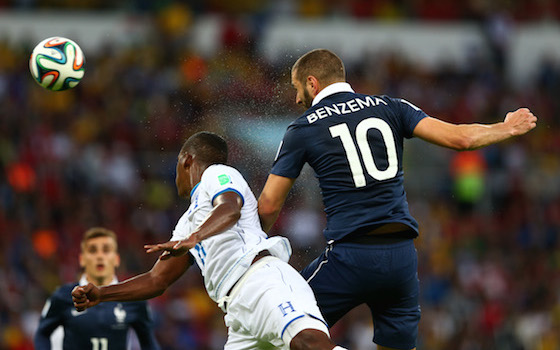 "It's a great win against a weak and illogical team. It's a great renewal especially for Benzema. He's our best player, from Real Madrid. We hope that he will be very big in the competition. Even if it is a very young team with an average age of 26," said Julien, a supporter who travelled to Brazil from France to watch the game.

"It is a great renewal for the French team. With Ribery out, Benzema took over his responsibilities. We congratulate and also thank him," added Adrian, who also travelled from France. A Karim Benzema brace and an own goal by goalkeeper Noel Valladares awarded after confirmation by goalline technology gave France their 3-0 victory over 10-man Honduras. Wilson Palacios charged into French midfielder Paul Pogba seconds before the break in a reckless challenge that had him sent-off for a second booking, and Benzema smashed home the resulting penalty to give France a lead they deserved having dominated the first 45 minutes.

"It was a good match with a good result to start with. This will give the team good morale and will allow them to continue well. It was a bit difficult though. It was a bit difficult but the team altogether managed to succeed. A World Cup is never e asy," said France supporter Dan. "The match was very very good. The French led well. 3-0 is good and we are very confident for the following games," added Charles, a French fan.

Three minutes into the second half, Benzema stole past the defence to shoot across goal with his shot coming back off the far post, rolling along the line and going in off Valladares. Benzema struck again with 18 minutes left when he shot from a narrow angle on the right past Valladares and into the roof of the net. The result will go a long way towards helping France banishing the ghost of their disastrous campaign in South Africa, when the players mutinied against coach Raymond Domenech and returned home in disgrace. It also signalled that Benzema could be one of stars of the tournament.

The match - the first between the two teams - was a bruising encounter. Despite accusations that Honduras were a thuggish side, France dished it out too and the first yellow card was handed to Patrice Evra after he body-checked Andy Najar in the 7th minute.

"It was a good game. France played very well and Honduras fought back. We are happy," said Dan, a Honduras supporter. "It was very good; they played very well, go Honduras," added Claudia, another Honduras fan who travelled to Brazil from Texas to support her countrymen.

France coach Didier Deschamps will take encouragement from the fact that the French looked composed and did not get flustered when the goals did not come, although arguably they could have banged in a few more in the second half against the reduced Honduran side.