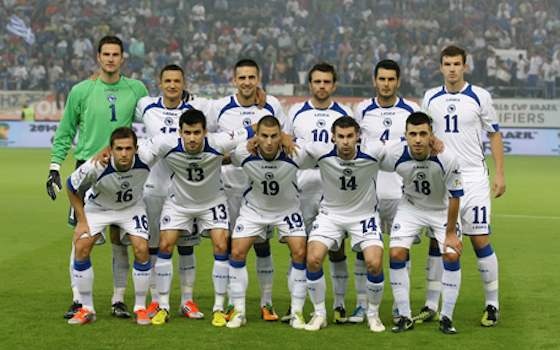 After two challenging post-war decades, the Dragons' appearance in Brazil breaks down barriers between ethnic groups

When Bosnia and Herzegovina's national football team steps onto the field in Rio de Janeiro for its World Cup debut against Argentina on June 15th, it will mark what many in BiH say is the country's greatest success since its independence.

A team of young players -- many of whom were pre-school aged refugees when the war ended -- are unencumbered by the issues that tore the country apart two decades ago. And they have inspired a sense of unity among fans.

"Our team is motivated to show the world that everything we achieved is not just a matter of pure lack or a chance," Safet Susic, coach of the BiH national team, told SETimes. "People love this team, not only in Sarajevo and Zenica where we play our games, but in the rest of the country also."

The Dragons, as they are called by their fans, delighted the nation by qualifying for the World Cup. After a number of near misses, it is the first time in the 19-year history of the national team that BiH has qualified for the final stage of an international tournament.

In the post-war years, politics have intertwined with all aspects of life in BiH. But suddenly, with the World Cup approaching, those issues have become less important.

"Football has demonstrated many qualities, but I am still surprised that local politicians are not able to acknowledge that," said Ivica Osim, a Sarajevo native and long-time football player and coach, who managed Yugoslavia's national team from 1986-1992. "They might be short-sighted and unable to see that the entire national team is multi-cultural and multi-ethnic."

Three years ago, BiH endured a two-month suspension from international play for refusing to replace the national football federation's three-member presidency -- comprised of a Bosniak, Croat and Serb -- with a single president. FIFA and UEFA, the sport's world and European governing bodies, selected Osim to head an interim committee to lead the federation past the controversy.

The principles that Osim and his colleagues stood for were clear: Religious and ethnic backgrounds are not important in the struggle to do the right thing on behalf of the country and its prosperity.

Football has a great symbolism in the former Yugoslav countries. The May 13th 1990 match between Dinamo and Crvena Zvezda symbolised the beginning of the war in Balkans. Shortly after that match, fans of the two teams became the greatest of enemies, killing each other during the war.

Today, with the Dragons preparing to play on world football's biggest stage for the first time, football is bringing fans together.

"When we finally achieved the placement at the World Cup, I couldn't stop kissing people that were in the bar with me. We all screamed 'Bosnia, Bosnia' and didn't care for the fact that our parents might have fought against each other 20 years ago," said Boris Bisanovic, a football fan from Bijeljina, Republika Srpska.

"The diversity of the nation is one of the greatest benefits of BiH, and I don't see the reason why it would be different with the football national team," said Eldar Hamzic, a football fan from Sarajevo, Federation of BiH. "We might be bad in politics, but the football players leave their hearts on the field, and we, the fans, appreciate it."

Ivana Trivunovic from Teslic said she is looking forward to cheering for the national team in the World Cup.

"Before, I was not interested in this sport," she said. "But, when my country plays such an important competition, then I'm very interested to be there for it."

"I'm very proud of the Dragons and believe that our neighbours from Serbia, Croatia, and Montenegro would also cheer them," said Suvad Basic of Tuzla. "For the first time I have a feeling that we will celebrate the success no matter what national flag we bear on our shoulders."