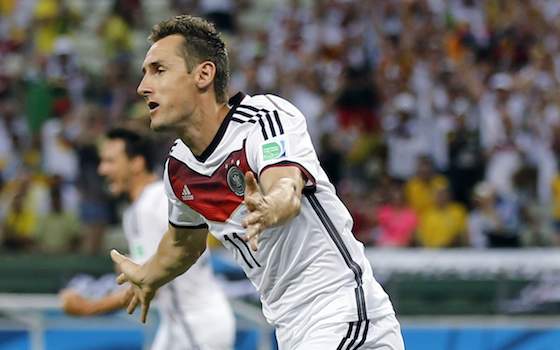 Miroslav Klose came on as a substitute to score the game-timing goal to salvage a tie for Germany against Ghana in a Group G match. Klose now has 15 career World Cup goals, equaling the record set by former Brazil star Ronaldo

Saturday's Group G match between Germany and Ghana at Arena Castelao in Fortaleza was thrilling.

After a scoreless first half, Germany took a 1-0 lead early in the second half. Mario Goezte gave Germany the lead in the 51st minute with a header that went off his knee before beating Ghana's goalie Fatawu Dauda. But Ghana answered with two goals to go up, 2-1, by the 63rd minute.

It was the 15th World Cup goal for the veteran German striker, tying him with Brazilian legend Ronaldo for the most goals in World Cup history. He is also Germany's all-time leading scorer with 70 goals in 133 games. "Twenty matches and 15 goals isn't bad at all," Klose told German television. "I don't know how long it's been since I did a somersault, but at least it worked out."

Germany, the world's 2nd-ranked team, could have secured a spot in the knockout round with a win against Ghana. But their tie means the United States can advance to the round of 16 if it beats Portugal on Sunday. Portugal will be eliminated if it loses.