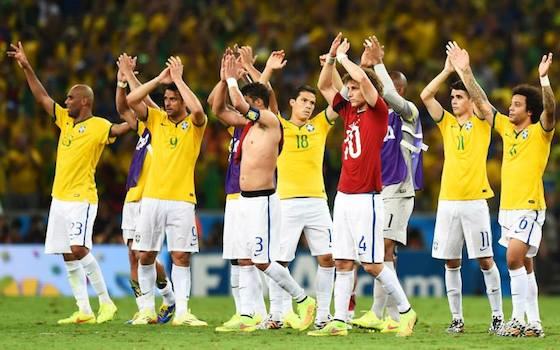 [ Check out photos from the Quarterfinal matchup between Brazil & Colombia ]

A stunning second-half free kick from Brazil's David Luiz sealed a 2-1 win over Colombia in a frantic World Cup quarterfinal, keeping the hosts on track for a sixth world title

Brazil's Captain Thiago Silva headed in Neymar's corner at the back post to put Brazil ahead in the seventh minute before Luiz thundered home a dipping 30-metre free kick midway through the second half. Colombia had a goal disallowed before James Rodriguez's penalty kick with just over 10 minutes remaining gave Colombia a chance.

For Brazil, the win came at a huge price.

Neymar, who leads his team with four goals has been ruled out of the World Cup after fracturing a vertebra in his back in the closing stages.

"We lost Neymar on that play and based on what I've seen, I think it's going to be tough for him to play," Brazil's coach Luiz Felipe Scolari said.

"He was kneed in his lower back, and he was crying out in pain, and I can guarantee it won't be easy for him to recover based on what the doctor told us."