USA Wants to Put Portugal and Ronaldo in Their Place 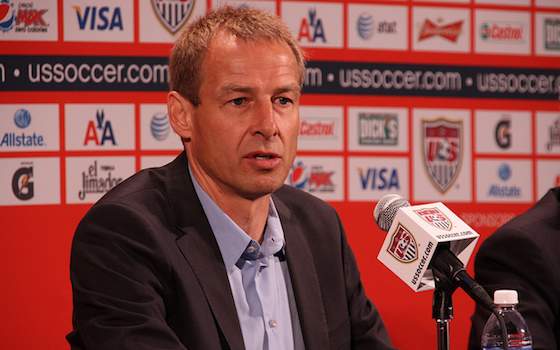 USA Wants to Put Portugal and Ronaldo in Their Place

The United States wants to put Portugal and Cristiano Ronaldo in their place when the two teams meet in the second Group G game on Sunday (June 22), a confident U.S. coach Juergen Klinsmann said on Saturday (June 21). Germany's 2-2 draw with Ghana on Saturday means the Americans will qualify for the second round if they beat the Portuguese, who are bottom of the group with no points

Germany's 2-2 draw with Ghana gives the Americans a chance qualify for the round of 16 if they beat the Portuguese, who are at the bottom of the group with no points.

"This is now the moment where you can prove yourself, this is the moment where you can step up and play those guys and put them in place so we want to put Cristiano and his team in place. We want to get out there with all the energy that we have, with all the discipline that we're going to bring, with all the aggressiveness we're going to bring to our play and make it our game. And we are ready for that, we have been preparing for that for a long time," he said.

The United States will be without forward Jozy Altidore, who left the Ghana game early with a hamstring injury. He will most likely be replaced by Aron Johansson. Although the Americans had several close shaves against Ghana, Klinsmann denied his team had been lucky.

"There is no game, right, when you will have the perfect game against anybody in the World Cup, so you will always give chances away, you will always make some mistakes at a certain point," Klinsmann said. Ghana's 2-2 draw with Germany showed how well the United States had done to beat the African side, he added.

Portuguese forward Cristiano Ronaldo looks set to play and will be looking to improve after a disappointing performance against Germany. Goalkeeper Tim Howard said it would be a mistake to focus too much attention on the player. "You know if you pay too much attention to Ronaldo then someone else will beat us. We have got to be diligent, and we have to be aware of their danger and we are, we have... as I mentioned, we talked about it, we have a game plan in place. Now we just have to go and execute it. Of course he is, he is the main man, the main man of this tournament, so we have to know where he is and we have to try collectively get around him and get some help and then support each other defensively," Howard said.

Howard said the game could be a 'turning point' for the team.

"We are ready for it, we are ready... Tomorrow is going to be a massive game for us, whatever happens in the other game, this is a massive game, a turning point for us if we can if we can win the game, we put ourselves in the next round," Howard said.

He also said the team had not trained specially for the heat and humidity in Manaus, which is in the middle of the Amazon jungle. "I think we're fit and we're conditioned and as long as we get good sleep and stay hydrated we should be, we should be fine," he said.

"USA Wants to Put Portugal and Ronaldo in Their Place "