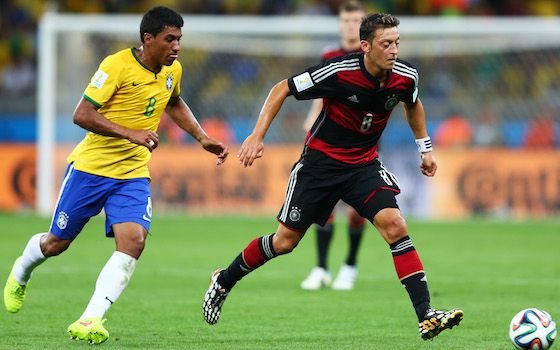 Brazil's defending was truly awful and Germany took full advantage with brilliant passing and movement to march into the final and hand the host nation their worst ever World Cup defeat.

An unmarked Thomas Mueller scored the first goal off of a corner in the 11th minute, and then, Miroslav Klose scored in the 23rd minute to become the World Cup's all-time leading scorer with 16 goals. Brazil's defense, badly missing the suspended Thiago Silva, fell apart as Toni Kroos scored twice in three minutes capped by Sami Khedira's goal in the 29th minute staking Germany to a 5-0 lead, leaving the crowd, and millions watching on TV, in a state of total shock.

Brazil's few second-half attempts were foiled by goalkeeper Manuel Neuer and Germany substitute Andre Schuerrle banged in the sixth in the 69th minute and lashed in a seventh to inflict Brazil's first home defeat in 64 matches and 39 years. Oscar scored a consolation goal for Brazil in the last minute.

On Sunday's final in Rio de Janeiro, Germany seeks their first world title since 1990 against either Argentina or the Netherlands, who meet in Sao Paulo on Wednesday