Korea and Russia Tie in Their World Cup Opener 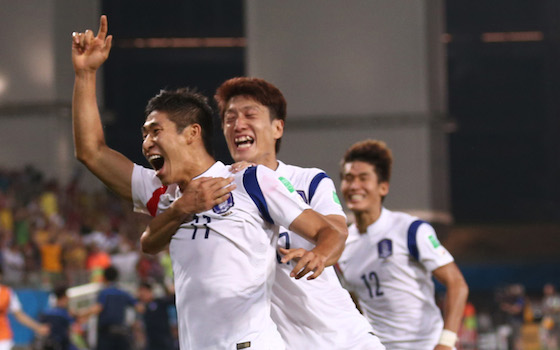 Veteran Alexander Kerzhakov scored three minutes after coming on as a substitute to rescue a 1-1 draw for Russia in their World Cup Group H opener against South Korea on Tuesday (June 17). The 31-year-old, sole surviving member of Russia's last World Cup team in the 2002 finals in Asia, swivelled and struck from inside the six-yard box in the 74th minute after fellow substitute Alan Dzagoev's shot was parried by goalkeeper Jung Sung-ryong

The South Koreans had taken the lead six minutes earlier when a blunder by goalkeeper Igor Akinfeev handed substitute Lee Keun-ho a shock opening goal at the Pantanal arena. The 2012 Asian Footballer of the Year unleashed a stinging shot from outside the box that the seasoned Akinfeev appeared to have under control but he let it slip from his grasp and over his shoulder into the net.

The match was lifted from its torpor by the goal after a chess-like first half of ebb and flow but little danger to the goalkeepers in which young South Korea striker Son Heung-min put two chances well over the bar. In the 10th minute, Yun Suk-young hit a long high ball down the left wing and Koo Ja-cheol headed it into the middle where Son took off on a fast diagonal run into the right side of the box where he shot too high. The 21-year-old striker had another chance in the 39th minute when he found space in the middle but his effort from the edge of the box sailed high over the bar.

Russia tried to stretch the Korean defense through Yuri Zhirkov on the left wing and Alexander Samedov on the right. Samedov found the angle too tight in the 20th minute and shot wide but on the half hour when he was fouled 25 metres out by Ki Sung-yueng, who was booked, keeper Jung managed to beat away centre back Sergey Ignashevich's powerful free kick.

Korea and Russia Tie in Their World Cup Opener Highlights

"Korea and Russia Tie in Their World Cup Opener "