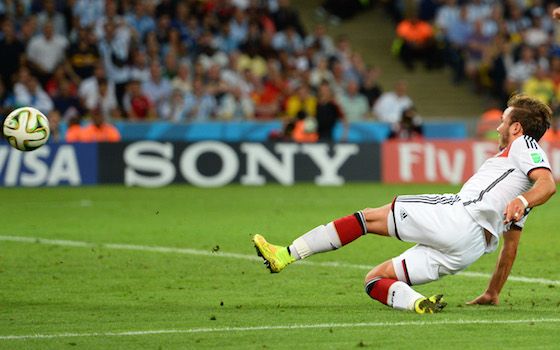 Germany's 24-year wait for another World Cup title is over. Mario Goetze scored the winning goal in extra time to give Germany a 1-0 victory over Argentina in a tight and tense World Cup final

With the victory, Germany becomes the first European team to ever win a World Cup in the Americas.

German substitute Mario Goetze scored in the 113th minute to account for the win at Maracana Stadium in Rio de Janeiro, Brazil, after neither team scored in regulation.

Goetze settled the ball with his chest to control a crossing pass from the left side by Andre Schuerrle and kicked it inside the right post, past Argentine goalie Sergio Romero.

Sunday's win marked Germany's fourth World Cup championship, but the first as a unified country. West Germany won in 1954, 1974 and 1990.

Germany and Argentina had met twice before in the World Cup title game. Argentina won in 1986, and the Germans won in 1990.

It was the third straight World Cup championship that went to extra time.