Colombia Advances with 2-0 Win Over Uruguay 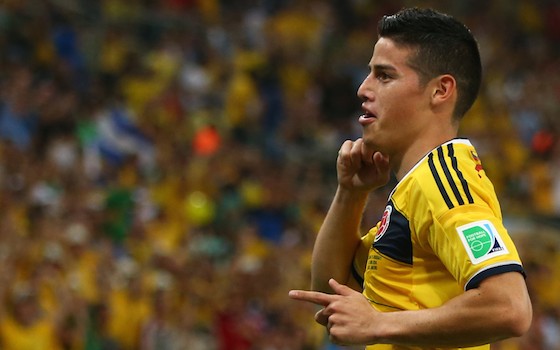 Colombia's 2-nill victory over Uruguay secured its first ever trip to the quarterfinals. Colombia's James Rodriguez scored two goals, one in each half, against an Uruguayan team that played without its star striker Luis Suarez.

James Rodriguez (pronounced Ha-mes) scored, perhaps, the goal of the tournament and put the finishing touch to a sweet, flowing attack as Colombia beat a toothless Uruguay 2-0 to reach the quarter-finals of the World Cup for the first time. Colombia plays host Brazil in the last eight in Fortaleza on July 4

Rodriguez gave his team the lead with a stunning long-range volley on the turn in the 28th minute and added the second from close range shortly after the break as Colombia dominated a Uruguay side that sorely missed banned striker Luis Suarez.

Rodriguez now has a tournament-leading five goals in Brazil and further enhanced his status as perhaps the World Cup Soccer tournament's biggest revelation.

While banned Uruguay striker Luis Suarez might have been the talk of the match beforehand, the 22-year-old Rodriguez was the name on everyone's lips at the Maracana at the end after scoring a truly stunning opening goal after 28 minutes and becoming the tournament's top scorer after 50 minutes with his fifth goal in four games. Rodriguez moved ahead of Germany's Thomas Muller and Argentina's Lionel Messi in the race for the 2014 World Cup's Golden Boot awarded to the most prolific goal scorer at each World Cup tournament finals.

While Rodriguez's first goal was due to his individual brilliance, his second rounded off a beautifully-worked team effort.

Without Suarez, banned by FIFA for biting, Uruguay had no way back. The opener came when Uruguay only half-cleared the ball as far as Carlos Sanchez, lurking alone in midfield. He instinctively headed it back in Rodriguez's direction and the next few seconds entered World Cup folklore.

Cushioning the ball on his chest with his back to the goal the striker, Rodriguez turned and shot with his left foot in one movement, powering the ball in off the bar from 20 meters. Although the ball brushed Uruguayan keeper Fernando Muslera's fingertips on its way in, he had no chance of saving it. It was a goal that was completely out of keeping with the opening phase of the game which saw both teams hesitantly stutter around without either creating any meaningful attacks.

Five minutes after halftime a cross from Pablo Armero was headed back across goal at the far post by Juan Cuadrado for Rodriguez to tap in the goal which effectively sealed the win.

Uruguay's coach Oscar Tabarez did not blame Suarez's suspension triggered by his bite of Italian player Giorgio Chiellini for the loss to Colombia. "I don't know what energy we could have lost on Suarez," Tabarez said. "We accepted he was suspended, we criticized the excessive harshness of the sanction, and that is the feeling of an entire people."

Tabarez praised Colombia for the win.

"When you face an opponent that does certain things better than you, you have to accept that. So we accept defeat, congratulate our opponent and wish them well, as a South American team, for the rest of the tournament."

"Colombia Advances with 2-0 Win Over Uruguay "