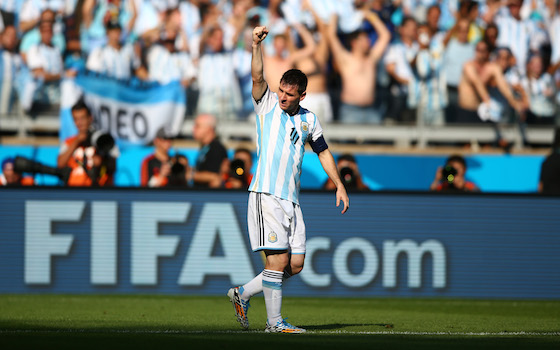 [ Check out photos from the Group F matchup between Argentina & Iran ]

Kept at bay by Iran's tight defense for 90 minutes, Lionel Messi finally delivered the winning goal in stoppage time with a curling, left-foot shot giving Argentina the 1-0 victory over Iran

Lionel Messi scored during injury time to give Argentina a 1-0 win over Iran and qualify the Argentines for the coveted Round of 16.

In Argentina's Group F match against Iran at Mineirao Stadium in Belo Horizonte, Argentina appeared headed for a scoreless draw. But Messi, a four-time world player of the year, superbly curled the ball past diving goalie Alireza Haghighi during the first minute of stoppage time to derail an unheralded Iranian team that fought hard.

"With Messi, everything is possible," Argentina's coach Alejandro Sabella said. "Not even two goalkeepers could have stopped that Lionel shot."