Algeria Through to Knockout Round After 1-1 Draw with Russia 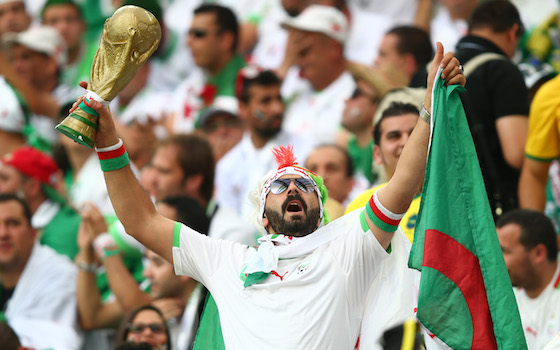 Algeria Through to Knockout Round After 1-1 Draw with Russia (Photo: Clive Rose/Getty Images for Sony)

[ Check out photos from the Group H matchup between Algeria & Russia ]

Islam Slimani headed an ecstatic Algeria into the Round of 16 for the first time with a 1-1 draw against Russia. Algeria -- the last team through to the knockout rounds of the World Cup -- faces Germany in the round of 16

On a momentous night for the North Africans, who were the last team through to the knockout rounds with Belgium already qualified as Group H leaders, Algeria recovered from an early Alexander Kokorin goal to advance.

The point, in a tense match at the Baixada Arena with everything still at stake and 2018 hosts Russia needing a win to go through at Algeria's expense, was all the 'Desert Foxes' needed to make history.

With Belgium finishing on nine points, Algeria, who face Germany for a place in the quarter-finals, ended with four to Russia's two and South Korea's one. The draw was all they deserved but it came after an early setback, with Kokorin meeting a beautifully-flighted Dmitry Kombarov cross to nod in a perfectly-executed header in the sixth minute.

Algeria, whose Bosnian-born coach Vahid Halilhodzic had called the match the most important in the country's soccer history, rarely threatened in the first half and looked a shadow of the side who thumped four goals past the Koreans. Slimani had an effort tipped over the bar by goalkeeper Igor Akinfeev in the 30th minute but the linesman had already flagged for offside and Algeria's other tame attempts had Halilhodzic gesticulating furiously from the touchline.

It all changed in the second half, though, with Algeria looking far sharper before the goal and then resisting the pressure.

Slimani seized his chance in the 60th minute with a powerful header at the near post from a Yacine Brahimi free kick that Akinfeev failed to reach. Capello had made just one change to the side who lost 1-0 to Belgium, handing a first start of the tournament to veteran striker Alexander Kerzhakov in place of Maxim Kanunnikov but the goals failed to flow.

"Algeria Through to Knockout Round After 1-1 Draw with Russia "