Japan and Greece Battle to 0-0 Draw 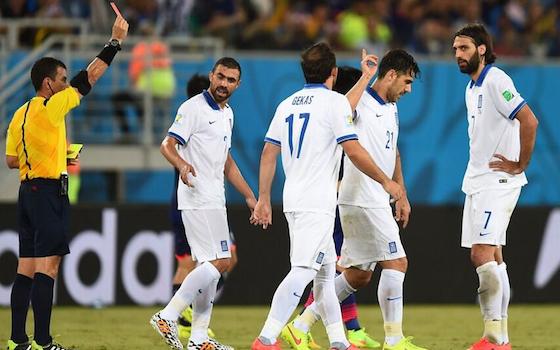 [ Check out photos from the Group C matchup between Japan & Greece ]

Ten-man Greece held Japan to a 0-0 draw that will suit neither side in a Group C match which ended with boos ringing around the Dunas arena and sent Colombia into the last 16 of the World Cup on Thursday (June 19). Both sides were looking to get their campaigns back on track after losing their opening encounters but Greece will be the happier after playing for 52 minutes without skipper Kostas Katsouranis, who was sent off for two yellow card offences

Japan dominated possession but were unable to make the most of the chances they created against a Greek defense which once again looked like the one that conceded four goals in 10 qualifying matches for Brazil. The Asian champions, who opened their campaign with a 2-1 defeat to Ivory Coast, stayed true to the attacking style that made them the first country to qualify for Brazil but will need to beat Colombia in their final match to have a chance of progressing.

Colombia tops Group C with six points from their first two games ahead of Ivory Coast with three. Japan faces the Colombians on Tuesday in Cuiaba, when Greece plays the Ivory Coast in Fortaleza.

Greece, who lost their opener 3-0 to Colombia, hassled and harried the Japanese to stay in the match after Katsouranis was dismissed in the 38th minute for taking Japan captain Makoto Hasebe's legs away from underneath him. It was Greece who came closest to opening the scoring in the remaining minutes before halftime, though, when Vassilis Torosidis launched a thunderbolt of a shot from the edge of the box which Eiji Kawashima parried away at full stretch.

#JPNvsGRE. Some interesting characters in the crowd! #WorldCup #WCT pic.twitter.com/VEvJdd5JkV