USA Advances, Despite Loss to Germany 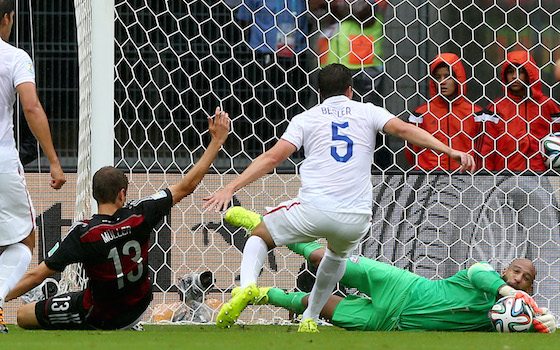 Team USA lost 1-0 to Germany, but the Americans made it to the World Cup's round of 16 on goal differential as Portugal defeated Ghana, 2-1

The U.S. Men's National Team fell 1-0 to Germany to conclude Group G play but Portugal's 2-1 victory over Ghana in the other Group G match, was enough to send the Americans through to the Round of 16.

The USA faces Group H winner Belgium on July 1st at Arena Fonte Nova in Salvador at 4 p.m. ET. The USA finished the group tied for second place on points with Portugal at four each, but the U.S. goes through to the knockout round and Portugal is eliminated based on a superior goal differential. The U.S. finished Group G play with four goals scored and four allowed while Portugal scored four, but allowed seven.

The lone goal of the match came in the 55th minute from German forward Thomas Muller. Muller's goal resulted from a corner kick taken short from the right side. A cross was then sent into the penalty area and towering center-back Per Mertesacker sent a powerful header on goal. It was well-saved by Tim Howard with a dive to his right but the rebound bounced out to Thomas Muller at the top of the box on the left side. Muller hit a perfect first-time shot with the inside of his right foot from 18 yards out that flew just inside the right post.

Soon after at Estadio Nacional in Brasilia, Asamoah Gyan scored for Ghana to equalize at 1-1 against Portugal in a match that was being played concurrently.

Thus started a span of 23 nerve-wracking minutes in which another Ghana goal would have put the United States out of the tournament on goal differential and put Ghana through in second place. Portugal star Cristiano Ronaldo gave the USA some breathing room with a goal in the 80th minute to put his country ahead 2-1.

The USA - Germany match was played in steady rain on a soggy field which stood up well despite rain that had been falling for hours before the match, causing serious flooding in Recife.

The USA had two chances to equalize the score in stoppage time of the second half, but Germany defender Phillip Lahm's sliding block of Alejandro Bedoya's shot deep in the penalty box kept the U.S. from scoring. Shortly after that, Clint Dempsey put a short-range header just over the bar.

The U.S. Men's National Team will play Group H winner Belgium in its next match on July 1, at Arena Fonte Nova in Salvador, Brazil, in the Round of 16 at the 2014 FIFA World Cup.

Belgium, which rested a few key players in its final Group H match in Sao Paulo, defeated the Korea Republic 1-0 despite losing Steven Defour to a red card at the end of the first half. The lone goal came in the 78th minute as Jan Vertonghen finished a rebound off the Korean goalkeeper.

The result gave Belgium nine points from three wins as it took first in Group H ahead of second-place Algeria, which came from behind to draw 1-1 with Russia in Curitiba in the group's other match of the day. The Fennec Foxes finished with four points and will meet Group G winner Germany in the Round of 16.

The USA is 1-4-0 all-time vs Belgium, but the teams are not total strangers in World Cup play. The first meeting between the countries came at the 1930 FIFA World Cup in Montevideo, Uruguay, a 3-0 victory for the Americans in the first-ever World Cup match for the United States.

The most recent meeting between the U.S. and Belgium was a 4-2 loss on May 29, 2013, in Cleveland, Ohio. Geoff Cameron and Clint Dempsey scored the U.S. goals in that game. Belgium is ranked 11th in the last FIFA World Rankings and the USA is 13th.

"USA Advances, Despite Loss to Germany "