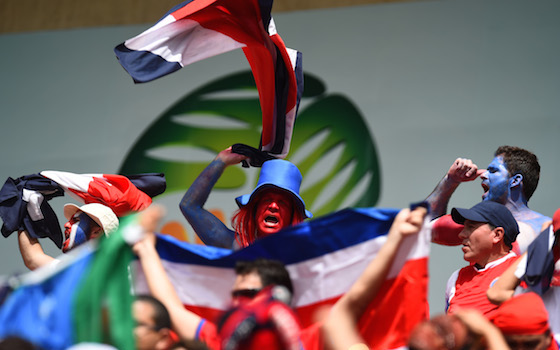 Greece coach Fernando Santos has challenged his team to 'rewrite history' when they face Costa Rica in the World Cup's round of 16 on Sunday, but it is a lesson from his side's own past that is making him extra wary

It's been 10 years since Greece shocked the soccer world by winning the 2004 European Championship with a team built on suffocating defense, and Santos sees similarities between those 2004 champions and the current Costa Rica lineup. Costa Rica was picked by few to make it to the round of 16 out of Group D which included former world champions Italy, Uruguay and England. As it turned out, Costa Rica finished first, with seven points from their three games.

"That reminded me of Greece in 2004. An unknown team that secured this historical achievement and this is one more reason why we must pay attention to them," Santos told reporters at a news conference. "They are here because they are a great team." Santos, who replaced Euro 2004 winning coach Otto Rehhagel in 2010, has led Greece to the knockout stage of the tournament for the first time.

Greece finished runners-up in Group C thanks to a last-minute penalty kick from Giorgos Samaras, which gave Greece the 2-1 win over Ivory Coast.

"After the group stage, it is an opportunity to rewrite history," Santos said. "There have only been eight winners (of the World Cup), but this is an excellent opportunity to go on and continue to enjoy playing in this unique tournament."

The Greek success in 2004 remains a powerful memory and motivation for the current squad. Among them is defender Vassilis Torosidis, who was just starting out on his professional career at the time. "I loved this team," he said. "These moments were unforgettable, we were so happy. "This is water under the bridge now, we still remember those great moments ... and hope we can emulate the achievement of those players in 2004."

A quarter-final against either the Netherlands or Mexico awaits the winners of Sunday's clash, but having already surpassed their previous best at the tournament, Torisidis says they can now relax. He also admitted he was worried about his Olympiakos team mate, Costa Rica's Joel Campbell, who was on loan at the Greek club from Arsenal last season. The 22-year-old scored nine goals for club and country last season in 38 appearances. "I hope he is less good tomorrow than he is with Olympiakos," Torisidis said.

Greece's total of two goals scored during the group phase is the lowest total of any of the teams in the last 16. Greece is also the only team to advance to the knockout stage with a negative goal difference (-2). With four goals, Costa Rica tied with Belgium for the lowest number of goals scored by a group winner.