Nigeria and Iran in Lacklustre 0-0 Draw 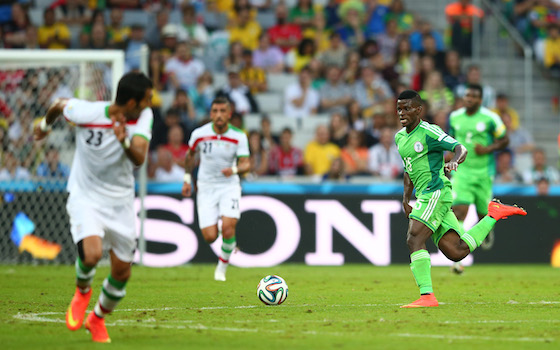 Iran and Nigeria laboured to the first stalemate of a scintillating World Cup on Monday (June 16) with a dismal 0-0 draw that left both sides still chasing their first victory at a finals since 1998. While Iran could take some small satisfaction in keeping a clean sheet for the first time since their debut in 1978, the bore at the Baixada arena stood out like a suit salesman on Copacabana beach

With Lionel Messi's Argentina, as the clear favorite in Group F, and exciting debutants Bosnia still to come, the other two look destined for an early exit unless they can raise their game considerably.

Both teams were whistled and booed off the field by the largely Brazilian crowd of 39,000 after a first half that looked shockingly meager compared to the goal feasts served up elsewhere. Iran packed their defense as expected and Nigeria, with Emmanuel Emenike rarely posing a threat as the main target man for the African champions, squandered their chances with long balls to nowhere and passes straight to opponents. The Super Eagles had the ball in the back of the net after seven minutes in a goal-mouth scramble but Ecuadorean referee Carlos Vera, perhaps harshly, ruled it out for a push on goalkeeper Alireza Haghighi. Ogenyi Onazi then drilled a shot wide two minutes later.

Iran came closest to breaking the deadlock in the 33rd minute when goalkeeper captain Vincent Enyeama produced a fine save to beat out Reza Ghoochannejhad's header from their first corner of the game. Nigeria defender Godfrey Oboabona made an early exit from the fray, replaced by former captain Joseph Yobo on the half hour after earlier receiving treatment on the touchline following a heavy tackle.

Nigeria coach Stephen Keshi warned on Sunday that the African sides were as good as any in Brazil and could win the tournament, but on Monday's evidence they will not be celebrating in Lagos.

"Nigeria and Iran in Lacklustre 0-0 Draw "