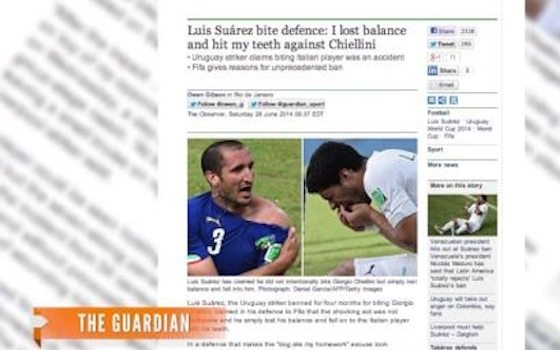 Uruguay striker Luis Suarez claims he lost his balance and accidentally made contact with Giorgio Chiellini, who says Suarez bit him

Uruguay's leading striker Luis Suarez should probably consider hiring new legal counsel. His "it was an accident" defense got him nowhere with FIFA officials.

Suarez has been suspended for nine matches and four months of any soccer related activity after he reportedly bit Italian defender Giorgio Chiellini during a match. That includes even attending his team's remaining World Cup matches. Suarez tried to claim he merely tripped into Chiellini but FIFA officials aren't buying it.

The Guardian quotes his statement to FIFA:

"After the impact ... I lost my balance, making my body unstable and falling on top of my opponent. At that moment I hit my face against the player, leaving a small bruise on my cheek and a strong pain in my teeth.”

And I suppose his dog ate his homework too. However, strangely enough, Chiellini called Suarez's punishment too harsh in his blog on Sportslobster . "I believe that the proposed formula is excessive. I sincerely hope that he will be allowed, at least, to stay close to his teammates during the games because such a ban is really alienating for a player."

What makes this comment so odd is that shortly after the incident Chiellini challenged FIFA to dole out a punishment. He said. "Suarez is a sneak and he gets away with it becuse Fifa wants their stars to play in the World Cup. I'd love to see if they have the courage to use video evidence against him." (Via Daily Mirror )

Suarez has been punished for his "Jaws" impression at least twice before this incident. (Via Flickr / Global Panorama ) Most recently in 2013, he was suspended from 10 Premier League games for taking a chomp at an opposing player. (Via BBC ) His bite in the game against Italy will also cost him considerable playing time in the Premier League as a player for Liverpool. The Daily Mail points out that Suarez will have to sit out for up to 13 games and will not even be allowed to train with the team.

There were talks of Liverpool selling Suarez to another team prior to this incident but Bleacher Report speculates that this ban means Liverpool has almost no hope of getting their money's worth out their star player.

Uruguay already had an appeal underway but it didn't save the team from a 2-0 loss against Colombia in the Round of 16.