Argentina into Semis with 1-0 Win Over Belgium 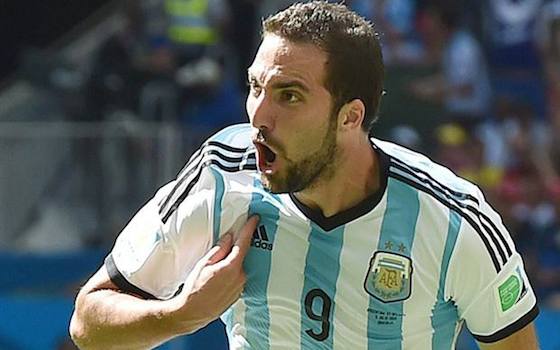 [ Check out photos from the Quarterfinal matchup between Argentina and Belgium ]

Higuain buried the shot into the corner of the net in the eighth minute to set up a semi-final clash against 2010 runners-up the Netherlands.

The 26-year-old Higuain reacted brilliantly when an Angel Di Maria pass was deflected towards him off Belgium defender Jan Vertonghen. He swivelled and struck the ball first time as Argentina ended a run of being eliminated in the last eight at the two most recent editions of soccer's global showpiece.

Belgium, had a couple of chances but otherwise offered little in attack despite sustained late pressure. Argentina looked the more ambitious in the early stages and Higuain's beautifully executed goal gave them a deserved lead. They came close to a second in the 28th minute when Lionel Messi, who was a constant threat to the Belgium defense having set the tournament alight in the group stages, threaded a superb ball through for a galloping Di Maria. However, the winger injured himself when his effort was blocked and was replaced by Enzo Perez a few minutes later.

Belgium were starting to enjoy more possession without really threatening before Messi flashed a free kick narrowly wide five minutes before the break. With Argentina apparently happy to sit on their lead, Belgium's best effort of the half came in the 42nd minute when Kevin Mirallas sent a diving header wide from Vertonghen's centre. Higuain was in fine form and raced through the center 10 minutes into the second half but, with Belgium goalkeeper Thibaut Courtois beaten, his shot clipped the top of the crossbar and the ball flew into the crowd.

Marouane Fellaini sent a 61st-minute header just over the bar in another good chance for Belgium and there was some desperate defending from the Argentines in the closing minutes. But they held on and captain Messi could even afford to squander a late one-on-one with Courtois as.

"Argentina into Semis with 1-0 Win Over Belgium "