Will World Cup Run Help Soccer Catch On in The States? 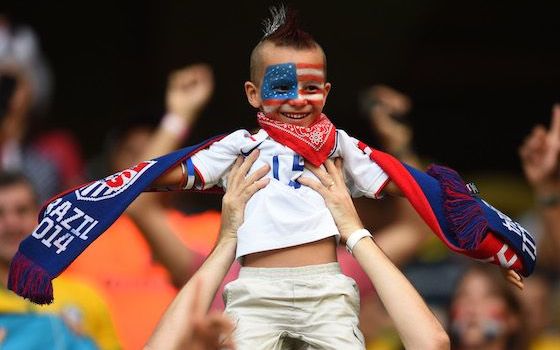 The U.S. men's national soccer team fell to Belgium in the knockout round of the World Cup. But will their run help popularize soccer in America?

Well, it was fun while it lasted. Now it's time for fans of the U.S. men's national soccer team to neatly fold "Old Glory" and put away the "I believe that we will win!" chant. (Via Flickr / Victoria Pickering )

Despite a late match goal from 19-year-old Julian Green and tons of saves from America's bald eagle Tim Howard, the U.S. fell to Belgium Tuesday 2-1. But Howard's record-setting 16 saves -- the most ever in a single World Cup match -- was all anyone was talking about immediately after the loss. Howard was "a national silver lining," "the man of this or any match"; he displayed "heroics" and "almost saved America."

So, this World Cup: people adopted a catchy chant, fans witnessed a history-making performance from Howard and the hype surrounding Team USA was pretty huge. But does that mean soccer is catching on in the states and did the performance from this year's U.S. men's team help? Many writers say no and no. We reported last week on the U.S.-World Cup craze and how nearly 25 million Americans tuned in to see the men's team take on Portugal. That made it the most watched soccer game in American history. But David Kahn for Bloomberg writes, "It took the established U.S. sports leagues decades of fits and starts to reach the popularity they enjoy today. ... But the NFL, National Basketball Association and Major League Baseball never had to fight for audience and market share against rival overseas leagues and tournaments that were so obviously superior."

He's talking, of course, about Major League Soccer or MLS -- the U.S. soccer league. And then there was this message from NBA Hall of Famer Kareem Abdul-Jabbar: "I don't think that soccer is going to catch on in America anytime soon." (Via Time ) Kareem isn't exactly a soccer expert, but I'm sure he's not the only one that feels this way. He wrote an opinion piece for Time , saying, "Soccer doesn't fully express the American ethos as powerfully as our other popular sports. ... Once the World Cup is over, soccer in the U.S. will return to its sick bed and dream of glory."

He's right about one thing: soccer attention heats up during the World Cup and cools when the event is over. The Economist shows this Google Trends chart. Searches for "soccer" -- in dark blue -- spiked in June of 2006 and 2010, but then leveled off. But according to The Washington Post , something different happened this year. FIFA reported more U.S. fans on their web products than the populations of host country Brazil, Germany, England and France combined. CNN also says U.S. visits to FIFA properties have tripled over the last four years.

So, recent data shows soccer could work its way into popular American athletics culture in the years to come, even if it hasn't quite caught on yet.

"Will World Cup Run Help Soccer Catch On in The States? "