Greece Through to Knock-Out Stage with Late PK 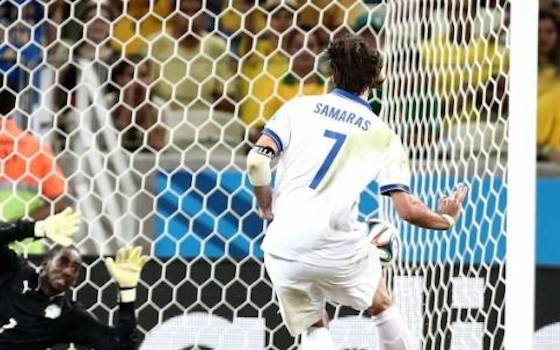 Samaras converted the 93rd minute penalty kick after he was tripped in the box by Giovanni Sio as the Greeks poured forward in search of a winner.

Their last-gasp victory left Greece second in the group on four points, one ahead of Ivory Coast and three clear of Japan. Colombia topped Group C with a perfect nine points. The Greeks, who had failed to get past the group stage at their two previous appearances at the World Cup, now face Costa Rica in Recife on Sunday in the last 16.

Greece needed to win to stand any chance of going through and took the lead just before halftime, Andreas Samaris pouncing on a mistake by Cheick Ismael Tiote and exchanging a quick one-two with Samaras before firing a low shot past Boubacar Barry. But the Ivorians equalised on 74 minutes, substitute striker Wilfried Bony stroking home after being set up by Gervinho.

The Greeks went back on to the attack and won on virtually the last play of the match to send Ivory Coast home at the group stage for the third consecutive World Cup.

Here's the penalty and goal that gave #GRE a stunning last minute victory over #CIV! WATCH

"Greece Through to Knock-Out Stage with Late PK "