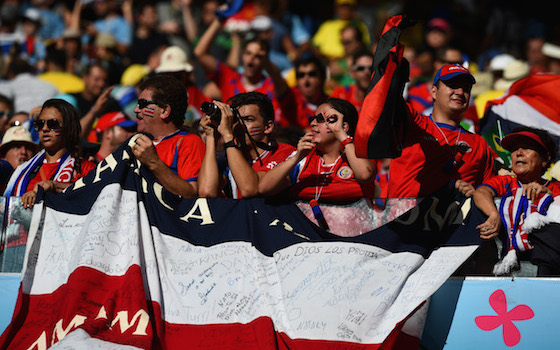 Fans in Costa Rica celebrated their team's 3-1 victory over Uruguay on Saturday (June 14) in the biggest upset of the World Cup so far. Thousands of ecstatic fans gathered at a central plaza in San Jose to collectively celebrate the unexpected win. "Incredible," said fan Carlos Granados. "I always said on Facebook Costa Rica is going to do something to talk about. It won't go to the eight, it will go to the quarter finals."

The Uruguayans took the lead in the Group D clash thanks to a disputed Edinson Cavani penalty midway through the first half before Costa Rica turned the match on its head in the second half.

Young striker Joel Campbell chested down a cross from the right and slammed a low shot past keeper Fernando Muslera after 54 minutes. Then, centre back Oscar Duarte gave Costa Rica the lead in the 57th minute with a brave diving header at the back post from a Christian Bolanos free kick. Marco Urena completed the remarkable victory with a third in the 84th minute, silencing an army of sky blue-clad Uruguayan fans in Fortaleza's Castelao arena.

In the plaza in San Jose, the fans were clearly moved by their teams effort. "Only with humility and with that you accomplish much. Just like that," said fan Gilmar Vargas. "Too much! Those three goals were the best thing I have seen in my life," said fan Carlos Mora.

Uruguay's misery was compounded in stoppage time when their defender Maxi Pereira became the first man to be sent off at this World Cup. It had all looked so different in the first half when Diego Lugano went down in the box under pressure from Costa Rica defender Junior Diaz as he tried to get on the end of a Diego Forlan free kick. Diaz clearly had his arms around the waist of his opponent but even so the Uruguayan captain made a meal of the challenge. Nevertheless, German referee Felix Brych pointed to the spot and Cavani slammed home the penalty. Uruguay faces England in their next group match while the jubilant Costa Ricans, who have only once made it out of the group stages at a World Cup, will take on Italy.