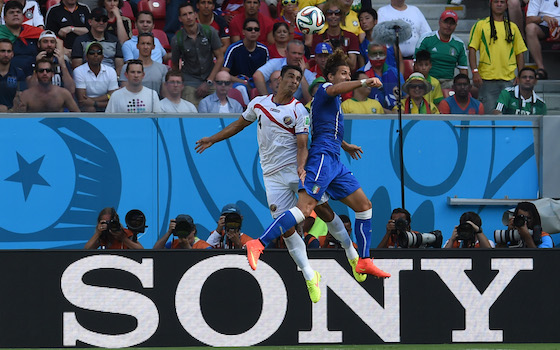 Costa Rica's Bryan Ruiz scored on a header just before halftime. Junior Diaz supplied the cross from the left, and Ruiz headed the ball onto the underside of the crossbar and over the line to beat goalie Gianluigi Buffon.

"We kept up our heads; it was a beautiful match," Costa Rica's coach Jorge Luis Pinto said. "The people of Costa Rica deserve this. They supported the team and me. This was for them."

The last team to keep Italy from scoring at the World Cup was France in 1998. Italy then scored in 15 straight World Cup games before Friday's loss, after which Italy's coach, Cesare Prandelli, tried to remain positive.

"Right now, I don't think we need to be negative," he said. "We need to think about recovering our energies because we have another game in a few days' time. We play against Uruguay, and whether we qualify depends on that."

Costa Rica leads Group D with six points, followed by Italy and Uruguay with three each. Uruguay and Italy play each other on Tuesday in their final group match, which will decide which team advances to the knockout round along with Costa Rica.