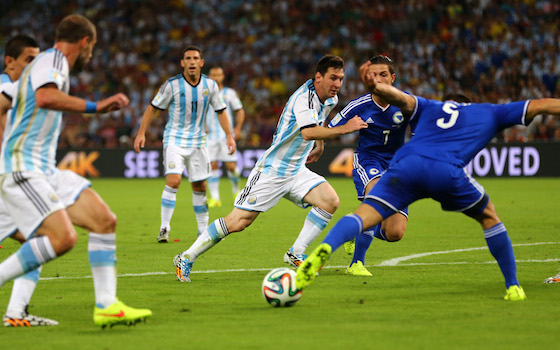 Lionel Messi lit up the Maracana with his first World Cup goal in eight years as Argentina were forced to battle for a 2-1 win over debutants Bosnia in their opening Group F match on Sunday. Although they took the lead in the third minute when Sead Kolasinac netted the fastest own goal in World Cup history, Argentina looked unconvincing until Messi struck with a dazzling run and sweet shot that went in off the post in the 65th minute

Even then, Argentina could not relax as Vedad Ibisevic scored in the 85th minute for Bosnia to set up a thrilling finale. It was Messi's first goal in the finals since scoring in Argentina's 6-0 win over Serbia & Montenegro in 2006.

The match began dramatically when Kolasinac put through his own net after only two minutes eight seconds, beating the previous unwanted record set by Paraguay's Carlos Gamarra against England in 2006 by 38 seconds. He was in the wrong place as a Messi free kick, headed on by Marcos Rojo, hit him and went in. Bosnia, naturally shaken after making such a bad start to their first ever match in the finals, did not dwell on their misfortune for long. After surviving a nervy spell, they began to look the better side against a subdued Argentina team.

Messi, whose tepid display in the 2010 World Cup when he did not score, has been exhaustively documented, made little impression until his goal and Bosnia had their chances with both Senad Lulic and Edin Dzeko going close in the first half. Substitute Ibisevic scored Bosnia's first World Cup goal when he shot through Sergio Romero's legs, but it was too little too late.