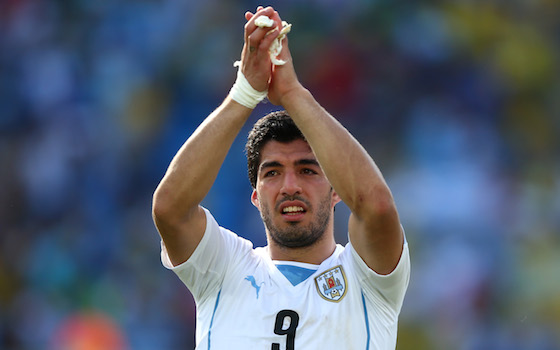 The World Cup story for Tuesday should have been about how Uruguay sent four-time World Cup champs Italy home with a single goal in the 81st minute.

Instead, the Internet is in a frenzy after Luis "The Cannibal" Suarez reportedly lived up to his nickname by biting an opponent during the match. (Via BT Sport ) We can't show the video because of licensing, though if you've been online, you've probably seen it.

In the 71st minute, Suarez looks to dig his face into the shoulder of Italian soccer player Giorgio Chiellini, who then throws a quick elbow. (Via Wikimedia Commons / Ailura , Flickr / Sylvain Lecocq ) Suarez and Chiellini both fell to the ground, with Suarez holding his teeth and Chiellini holding his shoulder. Despite Chiellini's protests to the official after the incident, neither player was penalized and Uruguay went on to win the match -- which will advance them to the next round. (Via Flickr / Jimmy Baikovicius ) According to The Telegraph , both players had things to say about the incident after the match. Chiellini, the apparent victim, said "Suarez is a sneak and he gets away with it because FIFA want their stars to play in the World Cup."

"These situations happen on the field. I had contact with his shoulder, nothing more, things like that happen all the time."

As a Los Angeles Times reporter puts it, "Luis Suarez picked an inopportune time to officially become a serial biter," considering the whole world is watching. Of course the Internet wasted no time in taking advantage of a delicious opportunity: "Biting is only okay when you're made of cinnamon and sugar." "Relax, their twist off." And, "Chew Trident. Not soccer players." (Via Twitter / @CTCSquares , @budlight , @tridentgum ) Fans watching the World Cup also jumped in with one Twitter user saying Suarez claimed a hat-trick with his third alleged biting incident. Another user questions Suarez's vampire origins, asking, "How does [he] not burst into flames in the sunlight?" (Via Twitter / @102greatgoals , @arda_ocal )

A FIFA official told the BBC the decision to investigate the incident will be made after the ruling body gets the referee's report. Mashable says Suarez could get anything from a one-match suspension to punishment lasting years, but adds, "FIFA has a history of issuing relatively mild sanctions in situations involving major players -- even when the entire world is watching, and the game is being brought into disrepute." Uruguay will square-up against Colombia -- with or without Suarez -- in the round of 16 on June 28.