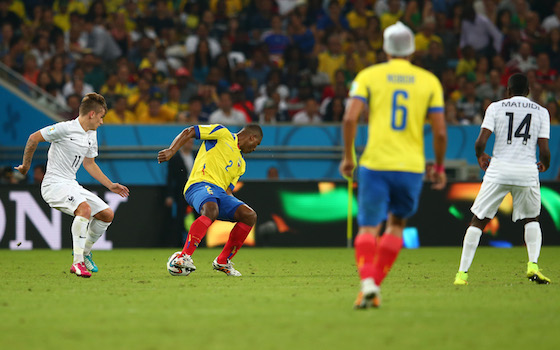 [ Check out photos from the Group E matchup between Ecuador & France ]

Ecuador keeper Alexander Dominguez made two tremendous saves denying Paul Pogba and Antoine Griezmann but Ecuador's chances were dealt a mortal blow five minutes into the second half when captain Antonio Valencia was sent off after clipping Lucas Digne as both men slid into a tackle. Cristian Noboa missed a great chance for Ecuador soon after but, having started the day level on points with Switzerland, they never looked likely to find the win they needed and they escaped defeat only because of some poor French finishing.

France lead Group E with seven points and will play Group F runner-up Nigeria while Switzerland, who finished on six, take on Group F winner Argentina. Ecuador ended with four points to become the only one of the six South American sides not to progress, while Honduras lost all three games.