Croatia Looks to Make Its Mark at World Cup 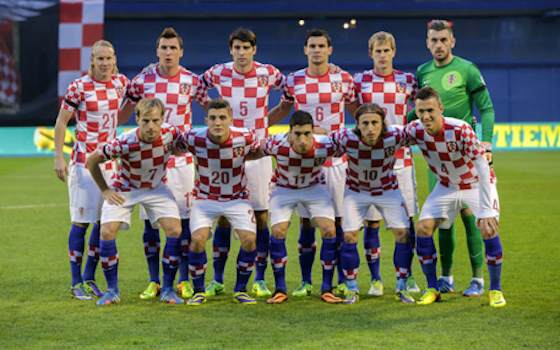 Croatia Looks to Make Its Mark at World Cup

After a month of preparation in the fresh alpine air in Austria, the Croatian national football team is spending several days at the Brazilian resort of Praia do Forte, adapting to the warm, humid climate and preparing to play in the opening match of the World Cup on Thursday (June 12th) against host nation Brazil.

Croatia enters the World Cup led by a manager who, as recently as last autumn, was not in line to be guiding the squad.

Niko Kovac was named to coach the country's under-21 squad in January 2013. But in October the Croatian Football Federation -- displeased with the performance of the senior national team under manager Igor Stimac -- made a change, sacking Stimac and tapping Kovac to replace him.

The 42-year-old Kovac was born in Berlin and spent nearly 20 years playing for clubs in Germany and Austria. He made 83 appearances and scored 14 goals for Croatia's national team from 1996 to 2008. His debut as the national team's manager came November 15th in Reykjavik as Croatia and Iceland played to a scoreless draw in the first leg of a two-game World Cup playoff qualifier.

Four days later in Zagreb, Croatia clinched a berth in the World Cup by beating Iceland 2-0 in the second leg.

Seven months later, Kovac is optimistic heading into the match with Brazil -- a team widely regarded as a favourite to win the tournament.

"For us it is an honour to open the World Cup against Brazil and, if we play with them, it is better to play first than the second or third game," Kovac told reporters last week. "Pressure on Brazil is huge, it will exceed the one which they feel in clubs. We all know their expectations. I think our group is one of the toughest in the tournament, so I cannot promise anything, but we'll do our best so that we were among those who will go through to the second round."

Croatia had an impressive opening act on the world stage, taking third place in its inaugural World Cup appearance in 1998. But the team failed to advance past the group stage in 2002 and 2006, and did not qualify for the 2010 World Cup.

The Croatian team consists of highly experienced players, familiar to European football fans. Among the most prominent of them is central midfielder Luka Modric, who last month played a key role as Real Madrid won the UEFA Champions League Final. Modric's assist in the 93rd minute set up the tying goal and Real Madrid went on to beat Athletico Madrid, 4-1.

Modric's performance earned him selection to the 18-player UEFA Champions League Squad of the Season.

English Premier League players Dejan Lovren, a defender for Southampton, and Nikica Jelavic, a striker for Hull City, are among the other headline players. Winger Ivan Perisic scored 10 goals in 33 games this past season for Wolfsburg of the German Bundesliga, and struck twice against Mali to lead Croatia to a 2-1 victory in a friendly on May 31st.

Team captain Darijo Srna, who has played since 2003 for Ukrainian club Shakhtar Donetsk, expressed enthusiasm about the opportunity to face Brazil in the World Cup again. He was part of Croatia's 2006 team that lost 1-0 to the Brazilians in Germany.

"The greatest strength of Brazil is that they are playing at home," said Srna, a veteran of 112 international appearances for Croatia. "But this is a new Brazil, with the best manager, [Luiz Felipe] Scolari, with a lot of quality players, and I think this team is more dangerous than the Brazil of Germany [in 2006]. Every day I hear people I know, and they are all aware that the public expects the championship of them, but we will look for our chance."

Ivica Olic, a 34-year-old striker and teammate of Perisic's with Wolfsburg, is cautious in predicting the outcome of the first match, but confident in the team's potential. In its other two first-round matches, Croatia will face Cameroon on June 18th and Mexico on June 23rd.

"Brazil is a favourite not only in the group, but the entire World Cup," said Olic, who scored 14 goals in 31 games for Wolfsburg this past season and has 18 international goals in his career. "Given their quality, we leave them a major role, while Croatia, Cameroon and Mexico are to fight for second place. There's plenty of time to get acquainted with Cameroon and Mexico, they certainly see their chance, but I believe we will find our way to the second round."

In the 2006 World Cup encounter with Brazil, Croatia lost 1-0, but did generate several scoring chances while its defence largely stymied the Brazilian attack. Ball possession was even in the match.

"Brazil now has a better defence than the 2006 team," Olic said. "Then we lost 1-0, but now we know they are not aliens from space that nobody can go against."

Ivan Ivkovic, who covers football for the website Tportal, said Croatia should have a potent attack, led by midfielders Ivan Raktic and Modric.

Like Modric, Raktic is a standout in Spain's La Liga, where he scored 12 goals in 34 games this past season for Sevilla.

"No one argues Croatia is a force in the midfield, where there are world class players such as Modric or Raktic, technically almost perfect with a great vision of the game," Ivkovic told SETimes. "This team definitely has the talent and experience to make it one of the positive surprises of this championship. Euphoria will be great considering that the whole world will watch the match against Brazil, and Croats are known as a nation that loves football. If they avoid losing this game, the euphoria will grow to enormous proportions."

"Croatia Looks to Make Its Mark at World Cup "