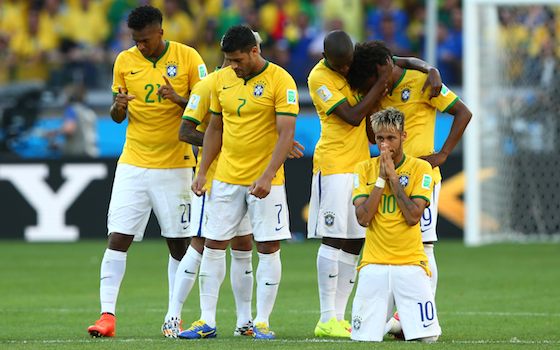 Brazil beat Chile in a dramatic game decided by a penalty kick, 3-2, to reach the World Cup quarterfinals after their the teams were 1-1 at the end of extra time. Chile's Gonzalo Jara missed his penalty kick after Neymar had converted for Brazil.

Brazil's goalie Julio Cesar was nearly impenetrable in the shootout. He stopped Chile's first two shots, staying near the middle of the goal to block Mauricio's Pinilla's attempt, then diving to deflect Alexis Sanchez's kick. He also dove on Vidal's attempt and watched as it bounced away. "I just kept my focus; that's all I had to do," Cesar said.

Brazil took the lead in the 18th minute when Thiago Silva flicked Neymar's corner and David Luiz was on hand at the back post to push the ball over the goal-line. Chile knotted the score at 1-1 in the 32nd minute thanks to Brazil's sloppy defending which let in Alexis Sanchez, who fired past Julio Cesar from close range.

Hulk had a goal disallowed for using an arm to control the ball and although Brazil dominated the second half and extra time, Chile almost stole it in the final moments when Mauricio Pinilla hit the cross-bar.

Brazil, seeking their sixth World Cup title and is the consensus favorite to win again this year, faces Colombia in the World Cup quarterfinals on July 4.