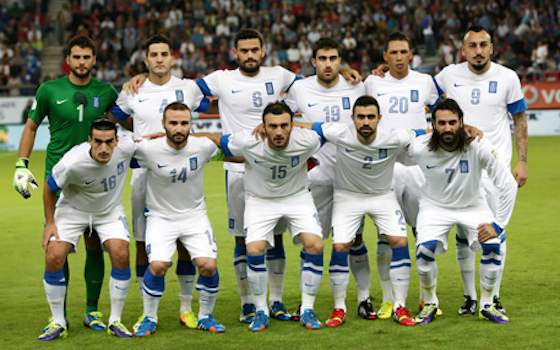 Ten years after stunning the international sports establishment by winning the UEFA Euro 2004 championship with a victory against host Portugal, and 20 years after its inauspicious World Cup debut, Greece is back on world football's biggest stage.

After being outscored 10-0 and losing all three matches in its first World Cup appearance two decades ago, Greece failed to qualify for the next three World Cups. In 2010 Greece returned and won a World Cup match for the first time, though the team lost its other two group matches and did not advance to the knockout round.

As it ventures to Brazil, the team is eager make its next stride.

Defender Sokratis Papastathopoulos, who plays for German club Borussia Dortmund and is considered the most prominent player on the Greek side along with recently released Celtic striker Giorgos Samaras, concurred with most pundits' views: Greece's first game against Colombia on June 14th will "make or break" its bid for second-round qualification.

"If we win the first game, we've seen [before] that with 4 points [gained in the first round] we can qualify for the next round. So, as you can understand, the match with Colombia is the key for our course at the World Cup," Papastathopoulos told reporters.

Asked to rate Greece's chances to advance past the group stage, Papastathopoulos, who began his pro career in Greece with AEK Athens, said the distinction is attainable, despite the difficulty of the group.

In addition to Colombia, Greece will face Japan on June 19th and Ivory Coast on June 24th -- giving the World Cup's Group C a collection of four teams with vastly different styles. If pre-tournament betting odds and predictions are considered, no real favourite or underdog has emerged from the group, with every point gained in play crucial.

Teams are awarded 3 points for a win, 1 for a draw and none for a loss in the group stage. The top two teams from each of the eight groups will advance to the single-elimination round.

"All of the teams [in this group] have the same chances of qualification, the top-rated team can beat the last one, and vice versa … our first game is very crucial and we need to get 1 or 3 points so that we can play hard in the next two games but without having our backs against the wall," Papastathopoulos said. "That doesn't mean that if we lose to Colombia we're eliminated. I say this because I've seen this reaction before in Greece, namely, you lose one match and have everyone say that we're now finished."

One high-profile report released by Goldman Sachs predicted Greece would qualify for the second round by posting three 1-1 ties against its Group C opponents, only to be eliminated by Uruguay in the second round.

Asked about the significance another stunning Greece football success could mean for fans in the recession-plagued country, Papastathopoulos stressed that "whenever we put on the national team's colours we aim to win, to do our best. That is how we can be of service to the people, the national team and our country. If we qualify [for the second round] we understand that our fans will be very happy."

Speaking to reporters in late May, former Yugoslav great Dušan Bajević, a star striker in the Yugoslav and Greek first divisions in the 1970s and early 1980s, expressed confidence in Bosnia and Greece -- two teams he knows well.

"The [Greek] team has capable players with experience from significant matches. Its opponents obviously cannot be under-estimated, but Greece is better than at least two of its opponents in the group," said Bajevic, who was born in Mostar and played from 1977-1981 for AEK Athens before returning in the late 1980s and managing five Greek clubs over the past two-plus decades.

"Bosnia, after all that it has been through, will experience moments in Brazil that will never be forgotten. We're obliged to have a dynamic presence [at the World Cup]. Bosnia can qualify for the next stage, as besides Argentina, all of the other teams [Iran and Nigeria in Group F] are at our level."

Bajevic, who scored 29 goals when he played for Yugoslavia's national team, nevertheless cautioned that Ivory Coast, not Colombia, was the most difficult team the Greek side would face.

"In the Balkans we always had strong teams. At one point, we were the best in Europe, with all the big clubs acquiring players from us. Presently, all of the countries in the Balkans are doing well," he said, when asked about the situation throughout the region.