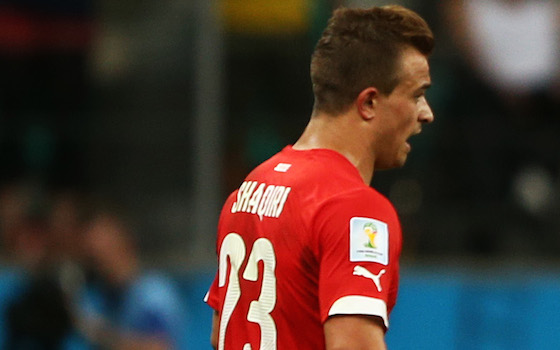 Xherdan Shaqiri netted a hat-trick as Switzerland beat Honduras 3-0 in Manaus on Wednesday (June 25) to secure the runners-up spot in World Cup Group E and a last 16 clash against Argentina. The Swiss went ahead after six minutes when Shaqiri held off left back Juan Carlos Garcia and unleashed a curling strike from outside the box past Honduran goalkeeper Noel Valladares. He made it 2-0 in the 31st minute after being put clean through on goal by Josip Drmic, and the pair combined again in the 71st minute as Shaqiri completed his hat-trick. France drew 0-0 with Ecuador to top the group and will play Nigeria in the last 16, while the Swiss play Group F winners Argentina

Switzerland's Xherdan Shaqiri scored a hat-trick against Honduras, leading his team to the knockout stage in style.