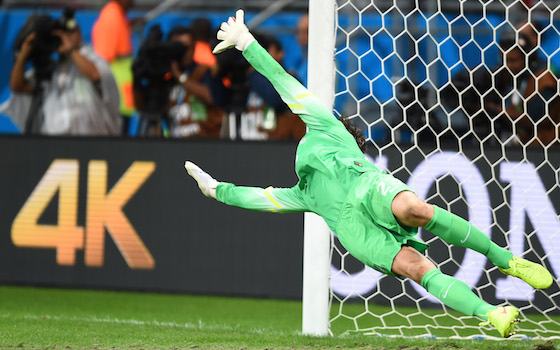 Costa Rica, with Keylor Navas in goal, held out for 120 minutes against a dominant Dutch team who hit the woodwork three times - twice late in normal time and again in the frenetic extra time period.

With extra time almost up, Netherlands coach Louis van Gaal sent Krul on for Jasper Cillessen as the Dutch sought to improve on their record of one victory in five previous shootouts in major tournaments. The towering stopper twice dived low to his left to thwart efforts from Costa Rica captain Bryan Ruiz and Michael Umana while the Dutch fired converted four of their penalties.

Returning to the scene of their opening match 5-1 mauling of defending champions Spain, the Dutch were a world away from that rampant display in a slow first half, although they still looked the more likely of the two sides to score. Probing at Costa Rica, their first chance came after 21 minutes when Robin van Persie was slipped in only to see his low, angled shot parried away by Navas, who again similarly denied Memphis Depay minutes later. Navas, a hero in Costa Rica's last 16 penalty shootout win over Greece, was again in fine form, tipping wide a curling 25 metre Sneijder freekick after 39 minutes.

It was easy to see why Costa Rica's disciplined defense conceded only two goals in Brazil, and a Dutch side that arrived as the tournament's top scorers having rattled in 12 goals were stumped for long periods after the interval, finally producing a late flurry as extra time loomed.

A Sneijder freekick struck the post after 82 minutes and after Navas denied Van Persie's low drive minutes later, the Dutch captain was again thwarted in the dying seconds when his driven shot was cleared off the line and onto the bar by Costa Rica midfielder Yeltsin Tejeda. Extra time was played out with end to end breaks, the Costa Ricans looking dangerous for the first time in the match with Cillessen saving well from Umana before Snjeider thundered a curling effort against the crossbar.

In the end only penalty kicks could separate the two sides.