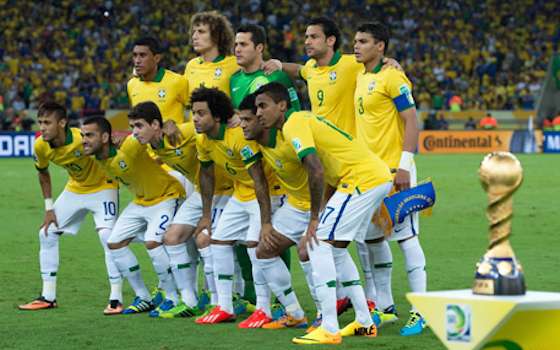 With the opening of the 2014 World Cup just hours away, many eyes are on consensus-favorite Brazil as it seeks to capture the world's marquee sporting event for a record sixth time.

The Brazilians appear primed to win it. As the hosts of the 32-team tournament, they will be competing before thousands of their rabid fans. Plus, they sport a young, talented roster that is led by one of the most dangerous strikers in the game, Neymar, and one of the top defenders in the world, Thiago Silva.

Toss in Brazil's 3-0 home turf rout of reigning world champion Spain in the title match of the Confederations Cup, a warm-up for the World Cup, as well as the Brazilians' incentive of erasing the memory from their heartbreaking loss to Uruguay in the 1950 World Cup finals, the only other time Brazil has hosted the event.

The 20th World Cup kicks off, when Brazil begins its quest to become the first host country to win the title since France in 1998, with a Group A clash against Croatia in Sao Paulo.

But could being the host country backfire on Brazil?

At the same time that the Brazilians are heavy favorites, they are under pressure to meet the weighty expectations of their home fans, according to Stefano Bernabino, chief editor of the television network Eurosport International.

"Visiting Brazil several times and working for a few years on this major event, you really feel when you're in Brazil that that's the homeland of football," Bernabino said on the VOA podcast Sports Buzz. "Football is more than a religion. Football is more than life for all the Brazilians, so playing on their own soil on one side is a great advantage, on the other side a great pressure. The whole country is expecting Brazil to win the World Cup. So it's going to be quite tricky. On one side, an advantage, on the other side, a big weight on the shoulders of Brazil."

The Argentines are paced by arguably the greatest player in the game in forward Lionel Messi, a prolific scorer who should lead his squad to the knockout phase as winners of Group F. Messi has drawn comparisons to Argentine legend Diego Maradona, who almost singlehandedly lifted his country to the World Cup championship in 1986, in part, with his famous "Hand of God" goal in the quarterfinals against England.

Germany has not won a World Cup since the East and West were reunified in late 1990, the year West Germany won its third World Cup. Spain is seeking to defend its 2010 World Cup title in South Africa, where it beat the Netherlands, 2-1, for the championship. Portugal has a mega-superstar in forward Cristiano Ronaldo, who snapped Messi's four-year streak with his selection as FIFA Player of the Year for 2013. Sidelined with knee and thigh injuries, he missed two of Portugal's tune-up matches before returning on Tuesday for a 5-1 win over Ireland. He is expected to start against Germany on Monday in the World Cup opener for both teams.

Those two football powers are part of the so-called "Group of Death," which also includes Ghana, considered by many to be Africa's best team, and the United States, with perhaps its deepest World Cup roster ever.

In Bernabino's view, Germany is confronting its own level of pressure.

"Germany needs to win again," he said. "They've been unsuccessful for such a long time."