Is a Laser To Blame for Russia's Loss to Algeria? 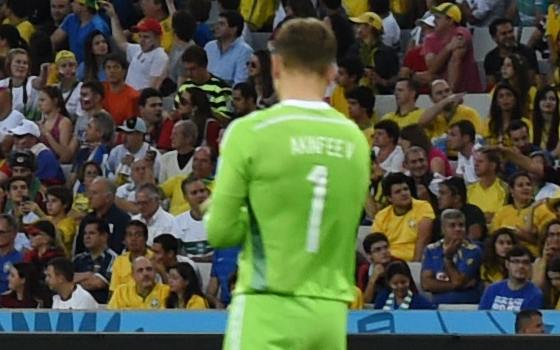 Is a Laser To Blame for Russia's Loss to Algeria? (Photo: Matthias Hangst/Getty Images for Sony)

Another World Cup match. Another controversy.

If you hadn't heard by now, there's some discussion about the factors that led to Russia's tie against Algeria on Thursday. The 1-1 score resulted in Algeria's advancing to the knockout round for Group H, while Russia got sent home.

Algeria's second-half tying goal came on a corner kick that was headed home by Islam Slimani. The Russian goalie Igor Akinfeev came off his line to make a punch at the crossing ball, but he missed, allowing Slimani to head the ball home.

It may have been the case of bad goal tending on Akinfeev's part. OR it may be what appears to be a laser pointed in Akinfeev's face just seconds before the corner kick is taken.

Check out this video from Vine below.

Look carefully in the first second of the video and you can see a green dot bouncing across Akinfeev's face.

Russia coach Fabio Capello was unequivocal in his belief that the laser kept Akinfeev from doing his job, and told the referees, who didn't make any call at the time of the play.

"He was blinded by the laser beam. There are pictures and you can see that in the footage," Capello was quoted as telling reporters after the match. "About the lasers it is not an excuse. The goalkeeper was unable to do his job. The laser beam was in his face."

"Is a Laser To Blame for Russia's Loss to Algeria? "