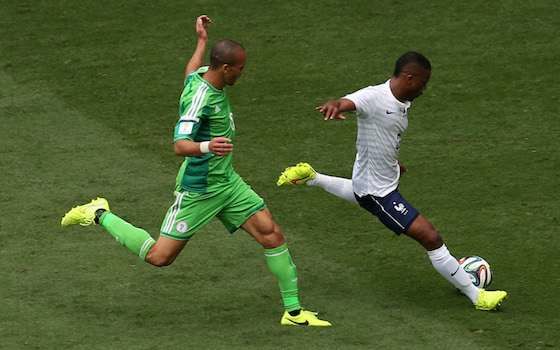 France scored two late goals to beat Nigeria, 2-0, in a rough match. Paul Pogba put France ahead in the 79th minute, heading in at the far post past Nigerian goalkeeper Vincent Enyeama

The win was sealed when Joseph Yobo turned a low cross into his own goal in stoppage time. France plays Germany in the last eight.

It was a controversial victory, however, as the game had swung France's way after Nigeria's influential midfielder Ogenyi Onazi was injured by a late tackle from Blaise Matuidi, who was lucky to escape with only a yellow card. Nigeria had been defending increasingly desperately in the run-up to Pogba's goal. France were centimetres from going ahead when Karim Benzema poked the ball past Enyeama, who managed to partly block his shot and Victor Moses hooked the ball off the line.

Nigeria escaped again when John Obi Mikel cleared Benzema's shot off the line, then Yohan Cabaye struck the underside of the crossbar with a thunderous long-range strike. Enyeama then tipped Benzema's close-range header over the bar, leading to the corner from which France scored their first goal.