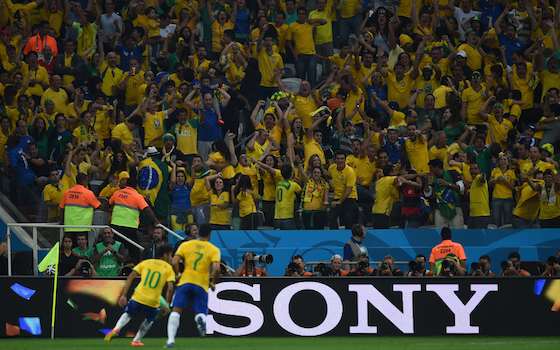 Neymar scored twice in the opening game of the World Cup to lead Brazil to a controversial 3-1 victory over Croatia.

Brazil had fallen behind in the 11th minute when defender Marcelo diverted a low cross into his own net as Croatia played impressively in the opening minutes, but Brazil tied the 29th minute when Neymar squeezed a shot from just outside the box that went in off the post.

The match turned when Japanese referee Yuichi Nishimura awarded Brazil a controversial penalty in the 71st minute when striker Fred went down inside the box with minimal contact from defender Dejan Lovren.

"If that was a penalty, we should be playing basketball," said Croatian coach Niko Kovac. "Those kinds of fouls are penalized there."

"That is shameful, this is not a World Cup referee. He had one kind of criteria for them and another for us. The rules were not the same," said Kovac.

Croatia had a few good chances including a disallowed goal in the 83rd minute after the referee ruled Croatia's Olic had fouled Brazil goalkeeper Julio Cesar. The foul called on the disallowed goal was just as controversial as the awarded penalty kick

Oscar poked in Brazil's third goal during the first minute of stoppage time to ensure the 3- 1 victory.