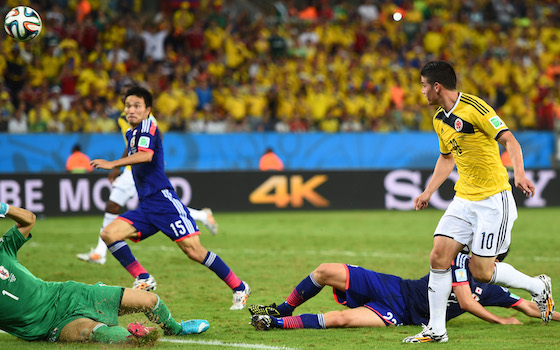 [ Check out photos from the Group C matchup between Colombia & Japan ]

Colombia, who are in the last 16 for the first time since 1990, took the lead after 17 minutes when Martinez was brought down by centre back Yasuyuki Konno as he raced into the box on the left at the Pantanal arena. Juan Cuadrado, one of only three players retained by coach Jose Pekerman in a team with eight changes from the 2-1 win over Ivory Coast that secured Colombia's second-round berth, scored to his right with Eiji Kawashima diving the other way.

Japan scored the equaliser at the end of the first half. Keisuke Honda sent a low, left footed cross in from the right corner of the box and Shinji Okazaki got in front of Valdes to steer a diving header past goalkeeper David Ospina just inside the near post.

With Colombia's main marksman Radamel Falcao missing the tournament through injury and Teofilo Gutierrez rested, Martinez underlined Colombia's depth of striking talent when he put them ahead again 10 minutes into the second half. Right back Santiago Arias cut inside and passed to substitute midfielder James Rodriguez who laid the ball off to his left from where Martinez shot home across the diving Kawashima. Martinez got his second eight minutes from time on the counter-attack as Japan threw bodies forward looking for an equaliser. James Rodriguez then scored a delightful goal after a clever run and chip over the keeper to complete the rout with his third of the tournament in the dying minutes.