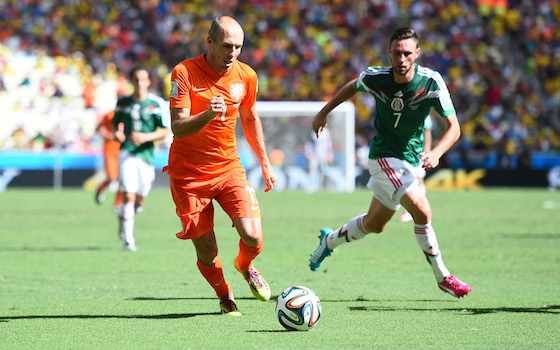 Mexico seemed certain to be moving on to the quarterfinals thanks to a Giovani Dos Santos goal in the 48th minute. But Wesley Sneijder scored the equalizer for the Dutch in the 88th minute.

Then in stoppage time, a disputed penalty kick was awarded to the Dutch, and Klaas-Jan Huntelaar converted it to give his team the thrilling comeback win.

The Netherlands will plays Costa Rica in the quarterfinals next Saturday.

With two minutes to play and Mexico leading 1-0, Wesley Sneijder pulled the Dutch level with a fierce drive, seemingly forcing the match into extra time. Then, in stoppage time, Mexico captain Rafael Marquez was judged to have tripped Arjen Robben in the penalty area and Huntelaar converted the PK to advance the Dutch.

It was a cruel ending for Mexico, who dominated much of the match and took the lead just after the break thanks to forward Giovani Dos Santos. He chested the ball down 30 metres from goal before firing a low left-foot shot into the bottom corner of the net. The Dutch almost equalised 10 minutes later when their big centre back Stefan De Vrij forced a brilliant reflex save from Guillermo Ochoa. The keeper parried the effort on to his left hand post and his defenders cleared it to safety.

For the Mexicans, defeat meant more Round of 16 heartache. They have now reached the last 16 at six consecutive World Cups and have lost every time.