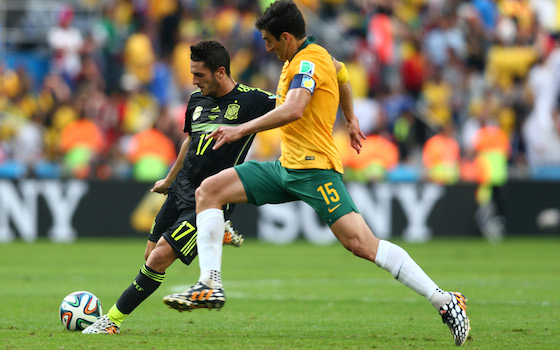 Villa neatly backheeled the opener in the 36th minute after Spain carved open the Australian defence. Villa, Spain's record goal scorer, claimed his 59th goal in 97 games for his country when he turned in the cross. It was probably his last appearance for Spain as he prepares to play in MLS soccer next year. Torres slid home in the 69th minute when set clear in the penalty box.

Substitute Juan Mata rolled a third goal between the legs of goalkeeper Mat Ryan in the 82nd minute as Australia ran out of steam. Spain had nothing but pride to play for after losing their first two games.

Australia were also on their way home after defeats to Chile and the Netherlands. Coach Vicente del Bosque made seven changes from the Spanish team that started the 2-0 defeat by Chile. Midfielder Andres Iniesta kept his place and won his 100th cap. Iniesta, scorer of the winner in the 2010 final, showed his craft by helping to create Villa's goal with a superb pass that sent defender Juanfran clear in space on the right wing. Del Bosque said he would decide on his future in the coming days.

"In the next few days, I'd imagine, or next week. There is no rush," Del Bosque told a reporter who asked him when he would announce whether he would remain Spain coach. Last week, Del Bosque said there would be consequences, including possibly for him, after Spain lost their first two World Cup matches against the Netherlands and Chile, making it impossible for them to reach the next round.