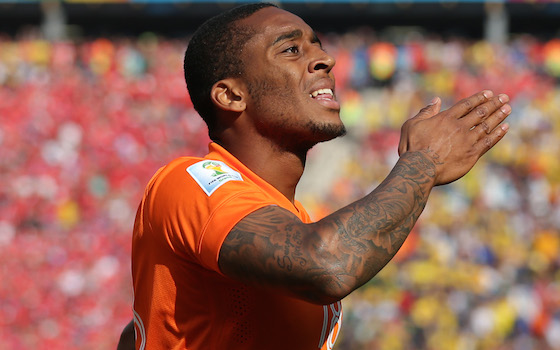 The Dutch beat Chile 2-0 to secure the top spot in Group B and thus avoiding Brazil in the Knockout Round. Substitute Leroy Fer scored with his first touch of the game on a header from Daryl Janmaat's cross in the 77th minute

Memphis Depay, made it two in stoppage-time after a marauding Arjen Robben broke down the left, turning what had been a scrappy match short of goal-mouth action into a comfortable win for the Dutch.

The Netherlands ended the group stage with a perfect nine points while Chile finished behind them with six. Reigning World Cup champion Spain finished third on three points after beating Australia 3-0 in the other Group B match. Chile, knowing only a win would secure top spot owing to an inferior goal difference, pressed hardest in the first half and bossed possession but they failed to hit the target once.

The second half was not much better for the South Americans, who were clearly missing the influential Arturo Vidal in midfield and failed to match the heights of their shock 2-0 win over Spain in the previous game. Alexis Sanchez dropped deep and worked hard to pull the strings in the middle, but the men in orange were more than equal to the task and frustrated Chile.

The Netherlands won without striker Robin Van Persie, after he was suspended for two yellow cards. But Robben was excellent again, launching a series of searing runs that threatened the Chile defence before his perfect cross sealed the three points. Chile faces Brazil in the Knockout Stage on Saturday, while the Netherlands faces Mexico on Sunday.

Chile's best result at a World Cup came on home soil in 1962, when they finished third. In 1998 and 2010 they reached the Knockout Stage, only to exit at the hands of Brazil on both occasions.