Chile Too Hot for Spain in World Cup Shock 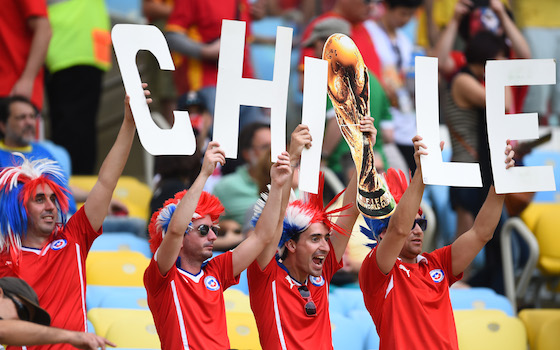 [ Check out photos from the Group B matchup between Chile & Spain ]

A mixture of elated and humiliated fans poured out of the Maracana Stadium in Rio de Janeiro this Wednesday (June 18) after defending champions Spain were eliminated in a shock 2-0 defeat to Chile. Spain's loss marks a new place in history for the team as the first World Cup champions to be eliminated after only two games. Chile, on the other hand, secured its pass into the knockout round after having achieved a 3-0 win over Australia in the team's first group match

Chile, on the other hand, secured its pass into the knockout round after having achieved a 3-0 win over Australia in the team's first group match.

"We are already winning because we are here at the World Cup. We did not make it into the stadium, but it does not matter because with this win over Spain and the fact that we are here, we are more than winning! That is all that matters," said Chilean fan Victor Cardenas.

Chilean fans inside the stadium gained confidence towards the end of the second half with two goals in the bag, chanting a resounding "E-li-min-a-do" ("Eliminated") to haunt the already deflated Spanish fans. "It was a bit nerve-racking during those ten minutes of the second half, but after that it was fine, it was easy. Spain is no longer what it was, and we are in a good state my friend, very good," said Chilean fan Leonardo Hernandez.

The defeat caused a second humiliation for Spain very early on in the tournament, following a 5-1 loss to the Netherlands in the team's first group match.

"It is better not to think about it. It was a game that we should have won, but we had very few opportunities. I am sorry but it was ridiculous, shocking. At least I will make it back in time for the coronation of our new King, and now the team can make it back with us!" said Spanish fan Tono Lledo.

"I think we will have to hang our hopes on the next World Cup now that we are out of this one. So now we are going to cheer for Brazil, that will be our team from now on, Brazil," said Spanish fan Pablo Garcia. The iconic stadium is often remembered for the "Maracanazo" scourged into the hearts of Brazilians as they narrowly lost to Uruguay in the 1950 World Cup final. In Brazil's bid to rid their beloved stadium of this ghost, it seems a new "Maracanazo" will weigh down upon the Spaniards until they can regain their double European Championship and former World Cup glory.

Chile Too Hot for Spain in World Cup Shock Highlights

"Chile Too Hot for Spain in World Cup Shock "