Neymar and Brazil in Pain Over World Cup Fracture 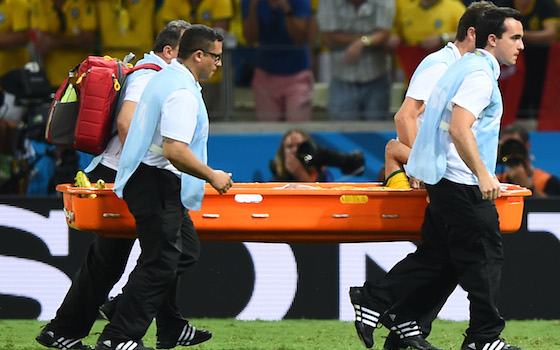 [ Check out photos from the Quarterfinal matchup between Brazil & Colombia ]

Neymar, who has scored four goals in the tournament, will miss the semi-final against Germany in Belo Horizonte on Tuesday and the final should they progress. He is expected to be out for several weeks.

"Unfortunately, he's not going to be able to play," said Brazil team doctor Rodrigo Lasmar. "It's not serious in the sense that it doesn't need surgery, but he'll need to immobilise it to recover," Lasmar said after the player was taken straight to hospital from the stadium in Fortaleza.

Neymar, Brazil's poster boy and one of the world's most marketable players, has been driving his country's bid for a sixth world title with his goals and creative talent. He went down after a challenge by Colombia's Juan Zuniga in the 88th minute and looked to be in considerable pain after what turned out to be a cracked third vertebra. The 22-year-old, who plays for Spanish club Barcelona, had to be carried off on a stretcher and was replaced by defender Henrique for the final minutes of the game.

Neymar was taken straight to hospital as Brazilians across the country cheered their team's success on home soil before the news of his injury put a damper on celebrations.

"It's a normal action, I tried to shadow him," defender Zuniga told reporters. "I was not thinking of hurting him. I was defending my country's colours." "On the pitch I'm defending my shirt, my country, but I didn't expect him to fracture a vertebra. He is a great talent for Brazil and for the world," Zuniga said.

"Neymar and Brazil in Pain Over World Cup Fracture "