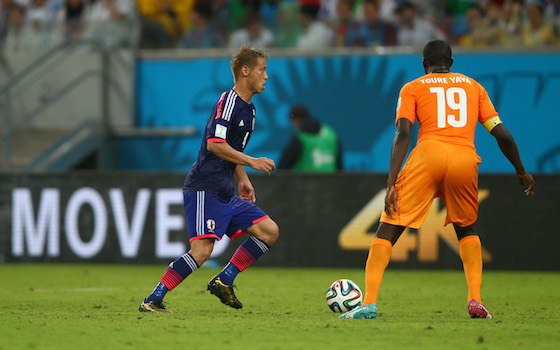 Two sharply-headed goals within three second-half minutes gave Ivory Coast a 2-1 Group C victory over Japan as the World Cup's four-game "Super Saturday" (June 14) concluded with yet another hugely entertaining match. Keisuke Honda's fierce left-foot drive after 16 minutes had Japan ahead, but the introduction of substitute Didier Drogba just after the hour seemed to lift the Africans and almost immediately they turned the game on its head

Wilfried Bony headed the equaliser after 64 minutes and the Ivorians had only just concluded their dancing celebrations when Gervinho glanced in the second, both goals coming from pinpoint crosses by Serge Aurier. Ivory Coast join Colombia on three points atop the open-looking group after Colombia's 3-0 victory over Greece earlier on Saturday, and the Ivorians will be growing in confidence that they can reach the knockout stages for the first time.