Productivity Comes to Screeching Halt During USA vs Germany Game 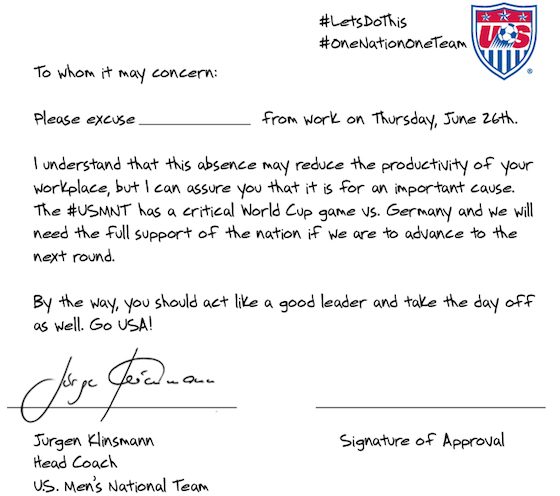 Americans dropped what they were doing to watch the U.S. play Germany in the World Cup, per Coach Jurgen Klinsmann's orders

The U.S. Men's National Team will play Group H winner Belgium in its next match on July 1, at Arena Fonte Nova in Salvador, Brazil, in the Round of 16 at the 2014 FIFA World Cup.

Belgium, which rested a few key players in its final Group H match in Sao Paulo, defeated the Korea Republic 1-0 despite losing Steven Defour to a red card at the end of the first half. The lone goal came in the 78th minute as Jan Vertonghen finished a rebound off the Korean goalkeeper.

The result gave Belgium nine points from three wins as it took first in Group H ahead of second-place Algeria, which came from behind to draw 1-1 with Russia in Curitiba in the group's other match of the day. The Fennec Foxes finished with four points and will meet Group G winner Germany in the Round of 16.

The USA is 1-4-0 all-time vs Belgium, but the teams are not total strangers in World Cup play. The first meeting between the countries came at the 1930 FIFA World Cup in Montevideo, Uruguay, a 3-0 victory for the Americans in the first-ever World Cup match for the United States.

The most recent meeting between the U.S. and Belgium was a 4-2 loss on May 29, 2013, in Cleveland, Ohio. Geoff Cameron and Clint Dempsey scored the U.S. goals in that game. Belgium is ranked 11th in the last FIFA World Rankings and the USA is 13th.

"Productivity Comes to Screeching Halt During USA vs Germany Game "