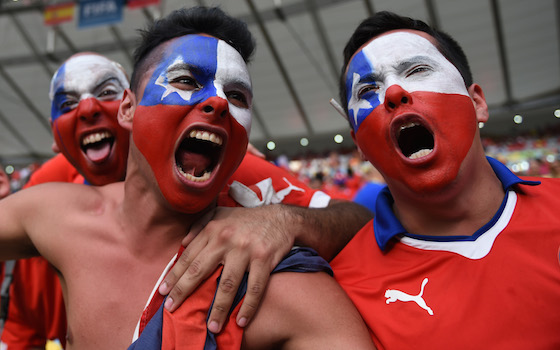 [ Check out photos from the Group B matchup between Chile & Spain ]

Chile had never beaten Spain in their 10 previous meetings but always looked the more enterprising, taking the lead with a brilliantly-worked Eduardo Vargas goal after 20 minutes and doubling their lead just before halftime when Charles Aranguiz banged in the rebound from a meek punch by keeper Iker Casillas. Spain, beaten 5-1 by the Netherlands in their opening Group B match, looked a shadow of the team that triumphed four years ago and won back-to-back European titles, with Sergio Busquets missing the best of their few chances early in the second half.

Chile and the Netherlands, who beat Australia 3-2 earlier on Wednesday, both have six points and their meeting in Sao Paulo on Monday will decide the group finishing order. Spain cannot progress and have become the third holders in the last four tournaments to go out at the group stage following France in 2002 and Italy in 2010