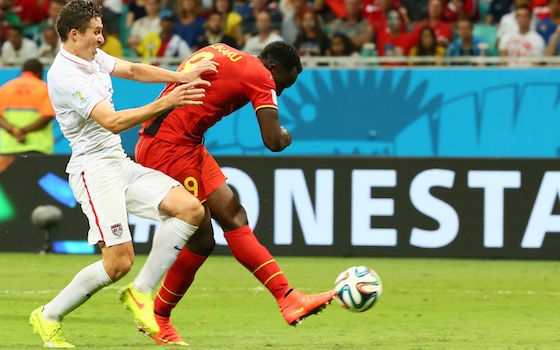 Belgium's Kevin De Bruyne and Romelu Lukaka scored in the 93rd and 105th minutes respectively, as Belgium defeated the United States to move on to the World Cup quarterfinals

After a closely contested 90 minutes that ended level at 0-0, the dream run for the United States in the 2014 World Cup was ended by Kevin De Bruyne in the 93rd minute who placed his shot in the left corner of the goal for the 1-nill lead.

The Belgians applied relentless pressure on the United States and their goalie Tim Howard throughout the match. Howard responded with the greatest effort by a goalie in World Cup history making a record 16 saves.

De Bruyne scored thanks to a pass from substitute Romelu Lukaku. In the 105th-minute, De Bruyne returned the favor with a pass to Lukaku. Lukaku drilled his shot inside the near post for a 2-0 Belgium advantage.

However, the determined Americans didn't give up.

Two minutes later, Forward Julian Green scored in the 107th minute to make it a 2-1 game. At age 19, Green is the youngest player to score a goal for the United States in a World Cup match. Rejuvenated, the United States created a few more scoring opportunities, but to no avail. Belgian goalie Thibaut Courtois made an tremendous save on Clint Dempsey to prevent the game from going into a penalty shootout.

It could have been all so different: U.S. substitute Chris Wondolowski missed a glorious chance in the dying seconds of normal time to seal victory.

The U.S. had a chance to win the last moments of stoppage time, but forward Chris Wondolowski missed a point-blank opportunity from about 5 meters out and shot the ball over the cross bar. Had Wondolowski settled the ball and guided it into the net, the United States would have been victorious

The United States held tough against Belgium's pressure and went into halftime even at 0-0.

Howard made a tough save in the first minute of play denying Divock Origi. Belgium dominated possession for much of the first half. Belgium midfielder Kevin De Bruyne stood out in the opening 45 minutes and saw a shot go wide in the 23rd minute. Clint Dempsey had the best scoring chance for the United States in the 21st minute, but Thibaut Courtois made a good save.

Belgium has won all four of its World Cup matches in Brazil and advance to the quarterfinals for the first time since 1986. Belgium plays Argentina.