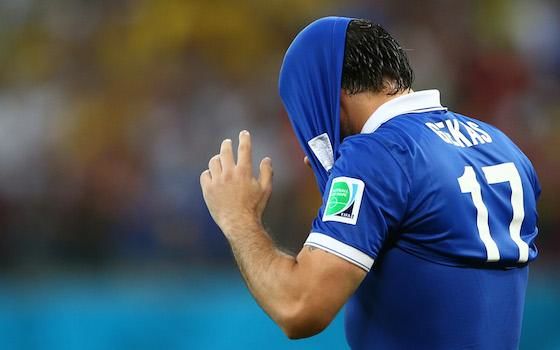 Already beating the odds by advancing out of one of the most difficult first round groups, Costa Rica shocked Greece in a penalty kick shootout Sunday in Recife.

The teams ended regulation and in extra time tied a 1-1, and Costa Rica made all five of its kicks from the penalty spot to prevail 5-3.

Costa Rica took the lead against Greece in the 52nd minute and played valiantly after being reduced to 10 men in the 66th minute after Oscar Duarte was expelled for his second yellow card of the game. But Greece got the equalizer in the first minute of stoppage time after the regulation 90 minutes.

Neither team managed to find the net in 30 minutes of extra time resulting in the shootout.

After the 1-1 draw following extra time, Costa Rica keeper Keylor Navas made a superb one-handed stop to keep out Theofanis Gekas's PK before Michael Umana fired high into the top corner to advance Costa Rica to the quarterfinals against the Netherlands.

"Last night, I dreamt, this, it seems untrue. I was relaxed because I dreamed it. I dreamed it but I didn't tell anyone. I felt very confident," said Umana. "This is for my family. It's for the colleagues who got injured before coming here. They're not with us, but they gave us a hand on the pitch."

Costa Rica, whose only previous appearance in the World Cup Round of 16 came in 1990, plays the Dutch in Salvador next Saturday.

An otherwise dire match was brought to life early in the second half when Bryan Ruiz calmly sidefooted Costa Rica ahead but defender Oscar Duarte was sent off on 66 minutes, allowing the Greeks to find a route back into the match. With the clock ticking past 90 minutes, Navas could only parry a shot into the path of Sokratis Papasthathopoulos who hammered it into the net.

After an uneventful first half, the spark the match needed to ignite into a spectacle arrived seven minutes after the restart. Greece's defense parted to give Ruiz acres of space to sidefoot a Christian Bolanos cross into the net from 15 metres. Yet their hopes of seeing out the match in routine fashion were scuppered when Duarte was sent off after receiving his second yellow card of the match after a sliding tackle that opened the door for a Greek comeback.

Gekas swivelled in the box and his low shot was only parried by Navas into the path of Papasthathopoulos who fired home. Extra time was largely one-way traffic, with exhausted Costa Rica defenders growing increasingly desperate in their efforts to keep the ball out.

Navas did well to beat away an effort from Lazaros Christodoulopoulos before somehow keeping out a header from Kostas Mitroglou after the clock had ticked past 120 minutes. Greece coach Fernando Santos was sent to the stands before the shootout started and the tension mounted as seven penalties hit the back of the net before Gekas stepped up to the spot. The substitute hit it firmly to the keeper's left but Navas leapt athletically to push it clear with one hand, leaving Umana to thrash his effort into the to left corner.