Uruguay Advances with Victory Over Italy 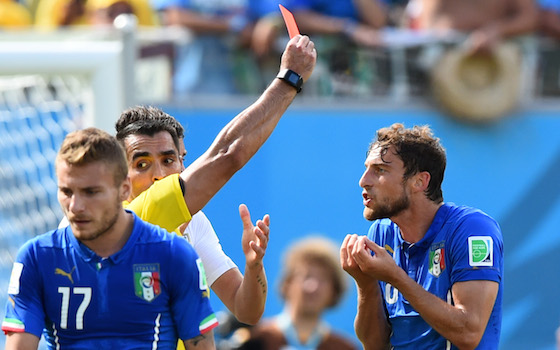 Uruguay defender and captain Diego Godin scored a dramatic winner nine minutes from time to send his side through to the World Cup last 16 with a 1-0 win over Italy on Tuesday (June 24) which sent the four-times champions home. The Italian players were still complaining to the referee after Uruguay striker Luis Suarez appeared to bite Giorgio Chiellini shortly before Godin rose to head in the winner

The Italian players were still complaining to the referee after Uruguay striker Luis Suarez appeared to bite Giorgio Chiellini shortly before Godin rose to head in the winner.

The match was sparked into life just before the hour mark when Italy's Claudio Marchisio was shown a straight red card for a foul on Egidio Arevalo Rios. Before that, it looked like Italy would succeed in keeping out Suarez and the Uruguayan attack and secure the point they needed to progress along with group winners Costa Rica.

After 81 minutes though, Godin rose above a scrum of players in the Italy box to power the ball into the net off his head and shoulder and give the Uruguayans a lead they never relinquished. Italy, who had sat back in numbers before Marchisio's dismissal, poured forward to try to rescue the situation, but could not. It was a brilliant if often brutal display of the art of defence from the Italians, who, when they lost possession, swarmed around the Uruguay players and fouled them with monotonous regularity.

Suarez was successfully subdued for the most part, Italian goalkeeper Gianluigi Buffon getting a hand to his cut back in the first half and saving well when he was put through on goal after 66 minutes. Italy had looked lively in midfield, but the untested partnership of Mario Balotelli and Ciro Immobile did not gel and the former was withdrawn for midfielder Marco Parolo.

Suarez appeared to sink his teeth into the shoulder of Chiellini. They clashed in the Italian penalty area 10 minutes from the end of the match and the furious Italian pulled open his shirt to show the apparent mark to the referee. Suarez was banned for 10 games last year after biting Chelsea's Branislav Ivanovic in a Premier League game and in 2010 he was suspended for seven games for biting PSV Eindhoven's Otman Bakkal while playing for Ajax Amsterdam. Four years ago he missed Uruguay's World Cup semi-final against the Netherlands after being sent for a handball on the line that denied Ghana what would have been a match-winning goal in the final minute of extra time in a last-eight match.

"Uruguay Advances with Victory Over Italy "