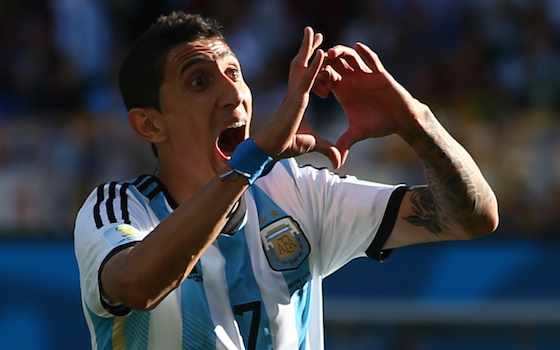 Angel Di Maria scored in 117th minute of extra time, thanks to a fine run and pass by Lionel Messi, to advance Argentina on to the World Cup quarterfinals with a 1-Nill victory over Switzerland

With two minutes remaining in extra time, Lionel Messi set up the winning goal with an outstanding run towards the goal and a pass to the right of the box to Angel Di Maria. Di Maria curled a low shot past Swiss goalie Diego Benaglio into the corner of the net. Switzerland had a chance to equalize but Blerim Dzemaili's header on a cross from Xherdan Shaqiri hit the left post.

The two teams waged a tight, scoreless battle through regulation and nearly all of extra time as chances were few and far between for both teams throughout the match.

The Swiss came close to scoring in the first half, when Xherdan Shaqiri connected with striker Josip Drmic through on goal. However, Drmic wasted the opportunity with a poor chip shot which Argentine goalkeeper Sergio Romero secured comfortably. The Swiss continued to battled throughout the match, but were unable to capitalize on any of their opportunities.

"We know that this could happen to us, but we gave our souls out there on the pitch, we fought with our lives for each ball, and we ended up as the winners," Di Maria said.

Swiss coach Ottmar Hitzfeld praised Argentina, which has won all four of its matches in this year's World Cup. "We made life very tough on them," Hitzfeld said. "They kept their cool. It shows Argentina has a good team."