Italy Holds on for 2-1 Win Over England 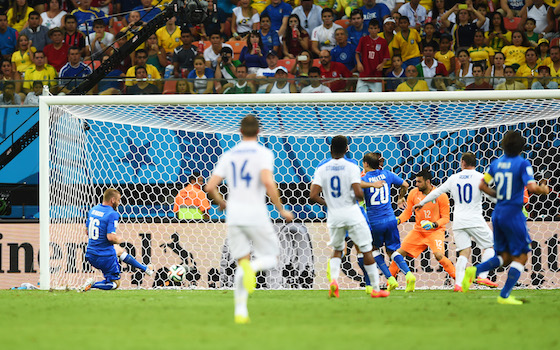 Italian striker Mario Balotelli powered home a close range header to secure a 2-1 win over England on Saturday (June 14) in an entertaining World Cup Group D game played amid baking heat and humidity. England left back Leighton Baines, who often looked out of his depth, allowed Antonio Candreva to cross from the right for Balotelli to soar high and score in the 50th minute. Andrea Pirlo almost made it 3-1 in second half injury time but his swirling 30-metre free kick crashed against the bar

England threatened sporadically in the second half but could not find a way past back-up keeper Salvatore Sirigu. Italy took the lead in the 35th minute after a cleverly worked short corner. When the ball was played into Pirlo the veteran midfielder let it run under his boot and Claudio Marchisio had time to hammer home a 25-metre right foot shot.

England recovered quickly and two minutes later a lovely pass from 19-year-old Raheem Sterling sent Wayne Rooney running down the left and his curling cross was met by a sweet half-volley from Daniel Sturridge. Italy though came close to scoring again in first half injury time. First, Balotelli chipped the ball over goalkeeper Joe Hart only for Phil Jagielka to head it off the line. Seconds later a clever pass found Candreva alone in the area but he crashed his shot against Hart's right post. Sirigu, deputising for the injured Gianluigi Buffon, was in good form in the second half, palming away fierce shots from Welbeck and Ross Barkley as well as a free kick from Baines.

Italy Holds on for 2-1 Win Over England Highlights