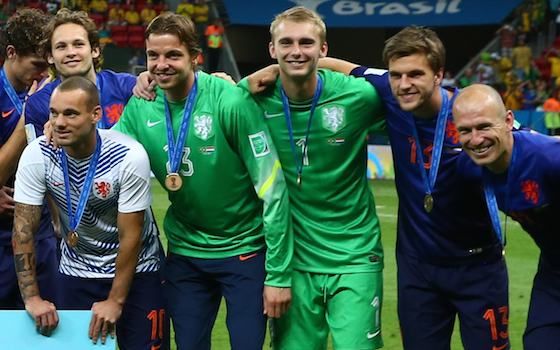 While it was not the 7-1 thrashing to Germany that will be talked about for decades, the 3-0 defeat to the Dutch in the 3rd place match had the feel of a game that only reopened the wounds of Brazilians that had just begun to heal.

The 3-0 loss added to the agonizing frustration for Brazil, which had been seeking a record sixth World Cup championship.

The Brazilians suffered a humiliating 7-1 loss to Germany in the semifinals that marked their worst-ever margin of defeat and the first time in 80 years that they allowed seven goals in one game. They also finished the World Cup with back-to-back home losses for the first time since 1940.

When the final whistle sounded Saturday, the Brazilian team was loudly booed by the nearly 70,000 fans in attendance.

"It's a terrible feeling, I don't know what to say," said midfielder Oscar, whose team allowed 14 goals, the most-ever for a host team. "After a huge loss to Germany, today we tried our best from the beginning to win third place but it wasn't our day. We have to see what went wrong so we can improve for the future."

In contrast, the Dutch finished a World Cup unbeaten in regular play for the first time, losing to Argentina in a penalty shootout in the semifinals following a scoreless draw. After they finished second at the World Cup four years ago, third place is their best showing since losses in the finals in 1974 and 1978.

On Saturday, they started fast at the same time that Brazil looked confused.

Van Persie scored in the third minute on a penalty kick, hooking the ball into the upper corner of the net past diving goalie Julio Cesar. It appeared that Brazil's Thiago Silva had yanked van Persie down outside the box, but the referee awarded a penalty kick.

In the 17th minute, Brazilian defender David Luiz mistakenly headed the ball to Blind, who punched it through uncontested for a 2-0 lead. Luiz was trying to clear a cross in front of the goal.

Brazil played catch up from there, trying a series of free kicks that failed.

The Dutch were proud of their performance despite falling short of their first World Cup championship.

"It was a great end," forward Arjen Robben said. "You can get rid of a bit of the shock of not going to the final but not completely. The disappointment stays, we've been so close. We deserved more. I'm finished, I've given everything. That's why third place is so deserved. I'm so proud of this team. Compliments to them."

For the second straight game, the Brazilians played without star striker Neymar, who fractured a vertebra in the quarterfinals and was lost for the tournament. Silva, Brazil's captain, was back after serving a one-game suspension for earning his second yellow card.

The Dutch played without one of their top scoring threats, midfielder Wesley Sneijder, who was injured in the pre-match warm-up.

"The most beautiful was our resilience," Wijnaldum said. "We were knocked out, but we came back and finished third. We wanted to close it out well."