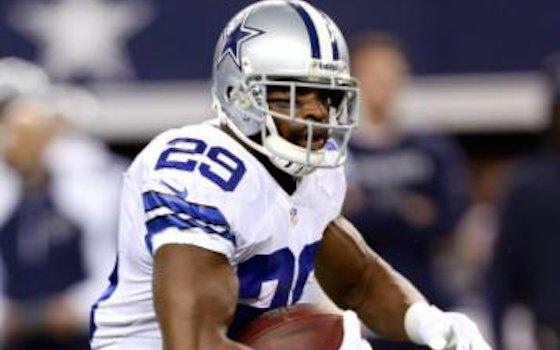 The Dallas Cowboys are tied for first place in the NFC East with a 3-1 record and rank first in the NFL averaging 165 rushing yards per game. Cowboys running back DE MARCO MURRAY leads the NFL in rushing with 534 yards and five touchdown runs.

Murray has rushed for at least 100 yards and a touchdown in each of the team's first four games and is one of only four players in NFL history to accomplish the feat. The other three -- JIM BROWN, O.J. SIMPSON and EMMITT SMITH -- are enshrined in the Pro Football Hall of Fame.

The longest start-of-season streaks in NFL history with at least 100 rushing yards and a touchdown run:

A look at the game-by-game rushing totals for each of the four players during their streaks:

While Murray has racked up the yards for the Cowboys, he has heaped the praise on his offensive line.

"I have to give credit to the offensive line," says Murray. "We're all on the same page. They make it a lot easier for me."

Dallas quarterback TONY ROMO notes that Murray and the strong running game have given the offense balance.

"I think he is better than a good back," says Romo. "He is a great back. He is playing with five guys up front on the line. You're able to see everybody's true skill set when you have really good complimentary guys around you."

Adds veteran tight end JASON WITTEN, "The offensive line is really physical. They stay together. And DeMarco has really evolved as a player. He's a dynamic player. He runs tough. He gets the tough yards. I can't say enough positive things about him."

This Sunday against the Houston Texans, Murray will attempt to pass Smith -- the NFL's all-time leading career rusher -- and join Brown and Simpson as the only players to start a season with a streak of five games with at least 100 rushing yards and a touchdown run. And while Murray doesn't spend time thinking about the streak, others around the league see other milestones on the horizon for the young running back.

"If DeMarco Murray can stay healthy this season, he will lead the league in rushing," says NFL Network analyst and Pro Football Hall of Fame running back MARSHALL FAULK.